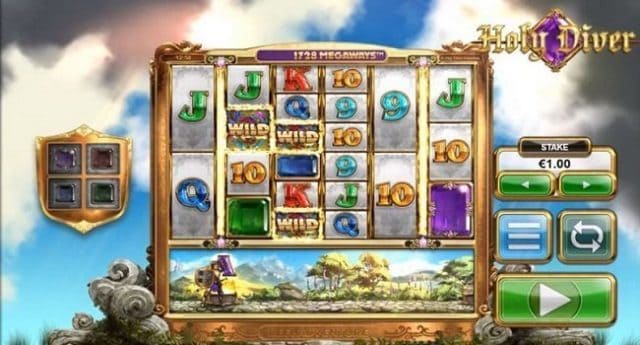 You can win huge money if playing Holy Diver video slot because it offers a jackpot of a whooping 300750 times on your total stake.

The game contains 5 bonus rounds including Free spin bonus feature. You can play Holy Diver slot at either your mobile phones or desktop.

The reels of the game include symbols such as A to 9 royal and 4 gemstones. The purple stone gemstone is the highest value symbol as it offers 15 times on your total stake if you land these symbols across all your 6 reels.

You will see an animated knight running on the reels/path and when he reaches at a treasure chest, he will kick it to open one of total 4 modifiers that are extra…

Standard Symbol Bonus feature- During this feature 1 of any lower value symbol will be picked randomly and it would be chanced in to a wild symbol.

Sword Bonus feature – In this feature up to 3 reels will completely change in to wild reels and will boost all you’re winning up by 7x. It means by combining everything, you would get a good total of 343 times on your total stake during this feature.

The next feature is Fireball Bonus feature – This feature will turn adjacent reels in to wild.

Gem Symbol Bonus feature – This feature is activated when one of more gemstones turn into wild.

You would receive 10 free spins if opting Free Spins feature.