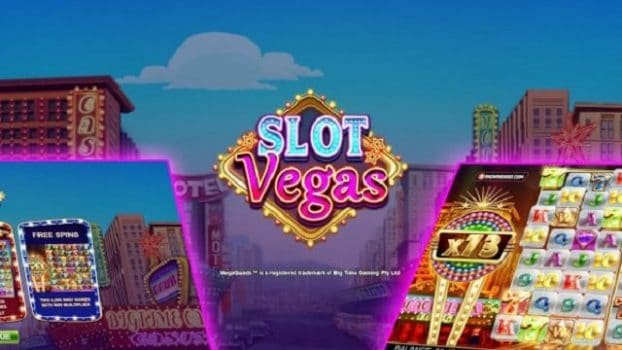 As the name suggests itself, the Slot Vegas Megaquads is a video slot game which takes place around Sin City i.e. Las Vegas with of 4×4 reels and starting 1,024 ways to win initially.

This game becomes a whooping 16,777,216 Ways to win during Rainbow Wild Bonus feature and during free spins feature.

Slot Vegas Megaquads is playable across all of your devices including smart phones, computers and tablets with initial coin size of $0.20 per spin to a maximum of $20 per spin.

You will see many great features in this game such as Symbol Multipliers feature, Rainbow wild bonus feature and free spin feature.

The game takes place around sin city i.e. Las Vegas where you will see low value A, K, Q, J, 10 and 9 Royals on your screen along with lucky 7s, a purple diamond and green, blue, red jewels.

The purple jewel is the most rewarding symbol that offers you 2x times of your bet for a maximum number of its symbols on your screen.

The game comes in with 2 wilds like a regular wild and a rainbow wild. When the regular wild appears (it only appears on reels 2, 3 and 4) it replaces all other symbols except the scatter and the rainbow wild and when the Rainbow Wild appears it also replaces other symbols except the scatters but it only appears on reels 2 and 3.

There are 3 bonus features available in this game. The maximum possible Payout could be 45,000x times of your bet and the RTP is 96.59%.

The symbol multiplier feature comes in to play when you land lucky 7s or 4 of a kind diamond symbols on your screen and when it happens you will have 1x multiplier which only increases during next rounds and could only reverted back when you trigger free spins feature.

This feature is triggered when you land Rainbow wilds on your reels and the Paylines would become 65,536.

Landing 4 or more gold VIP casino chip scatters on your reels will trigger the free spins feature and you will get 6 free spins with 3 extra free spins for each additional scatter.

So, to get 12 free spins you will have to land 6 scatters on your screen and the Paylines will be 4096.

Landing rainbow wild bonus feature during free spins feature will make this slot more valuable and it will become a massive 16,777,216 ways to win slot game.