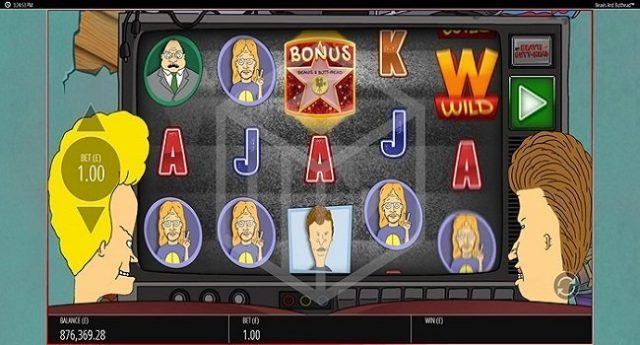 Beavis and Butthead is an online slot game inspired by an American series that was hugely popular back in 90s.

The Blueprint Gaming powered game is of 5 reels and 20 Paylines and with an RTP of 95.49% this seems to be a very impressive.

The slot comes in with a lot of bonus features and cash prizes such as the wild symbol which could replace all other symbols on your screen and will form winning combinations for you and will let you win very good amount of money.

There are 6 modifiers available in this game that comes in with base game. These 6 modifiers during base game are extra wilds Die, Fly, Die or Wild reels.

Some other modifiers that can change your game during base game are the Mystery symbols, 3×3 colossal reels, bonus game or big winning spins.

The game also comes in with 6 different options such as To B or Not to B, Don’t Be a Buzzkill, The Great Cornholio, Maxi Mart, Customers Suck or Just Deserts.

Beavis and Butthead slot contains the same characters that the original series had such as 2 main characters on the reels along with planet of others that the series featured.

You will see many symbols on the reels as well as some colorful Logos and Royals/playing cards.

This new video slot from Blueprint is surely a good one for you that could get you some decent cash prizes.

Beavis & Butt-Head should be an exciting game for you. You should definitely take a look at this game if trying to play a mid level volatile game.