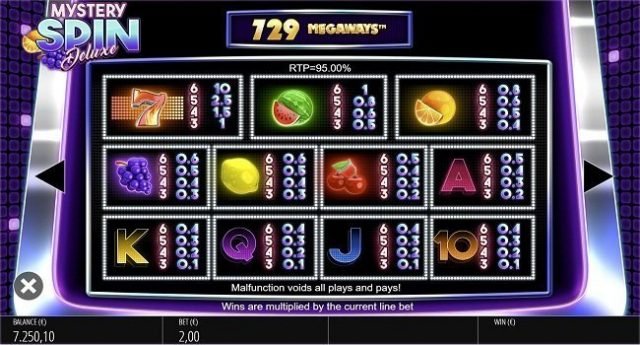 Mystery Spin Deluxe Megaways is 6 reels and up to 117,649 Paylines video slot game powered by Blueprint Gaming which is one of the top iGaming company that creates best slots for real money casino sites.

Just like many other Blueprint slots, this particular slot from the house of Blueprint is also a Megaways slot game that comes in with many different bonus features and it is platform independent.

This is a 6 reels MegaWays slot game and it means means you could have each reel with up to 7 symbols.

Coin range for this game starts from 10p per spin to up to 10 per spin. There are 3 bonus rounds exist in this game where you could win up to 10,000 times of your stake.

Mystery Spin Deluxe Megaways video slot is a very nicely designed slot game where you would see some basic symbols or low value symbols such as A, K, Q, J and 10 Royals as well as some high paying classic symbols such as lucky red 7s, grapes, oranges, cherries, lemons,  and watermelons.

The game comes in wild symbol that replaces other symbols except the Mystery symbols and could fetch you good wins.

Mystery Spin feature-During this feature, only mystery symbols will appear on synced reels. This feature can take place randomly on any spin.

Mystery Spin Deluxe Megaways could be a good game for players like you who are looking to have some fun with real money slot games. Not a very tough game and it is playable across all devices with just 10p per spin as starting coin sizes.