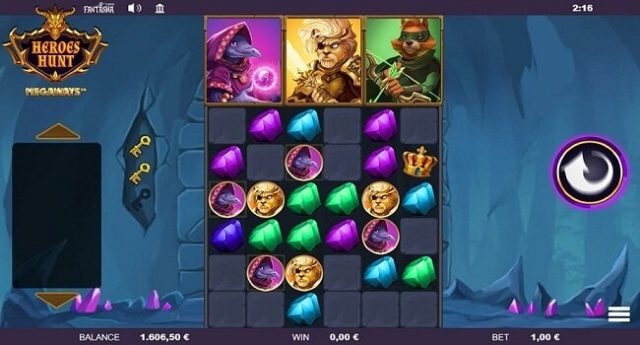 Heroes Hunt Megaways is a historical fantasy adventure themed online slot of 6 reels and up to 46,656 paylines powered by Fantasma Games and backed by Relax Gaming.

The game comes in with wilds, scatters, free spins, Random features as well as with ‘Autplay’ option and is playable across all devices including mobile phones and tablets.

Heroes Hunt Megaways is a high volatile online slot machine which has 3 modifiers as well as 2 free spin modes.

Heroes Hunt Megaways is a very impressive online slot game which has everything that you might need while playing real money online slot at your own doorstep using your mobile phone or tablet or computers.

The game has a perfect playing environment as well as a very impressive designing, graphics and the soundtrack.

You will see a crystal-filled cave in the background where 4 low paying symbols i.e. gemstones along with a crown, a coin and a trio of animal heroes are located.

You will also see an Archer, the warrior as well as the red dragon on the reels out of which the red dragon is the highest paying symbol which pays 20x of your bet for 6 of these symbols on your reels.

This feature is about to choosing 1 of the 3 warriors of the game and they are the Wizard, the Warrior or the Archer. Each of them comes in with different rewards.

If you choose to go with the wizard feature then you could see explosion symbols on reel 2 through 5. This explosion will create symbol blocks of 2×2 or 3×3.

If this feature is unlooked then you will have expanding wilds on reel 2 through 5 with applied multipliers of 1x and 6x.

The multiplier would become double if you land more than 1 expanding wild on the same spin.

The Archer feature will give you an arrow on reel 2 through 6 and you will get a respin and the avalanche will take place.

Landing the treasure chest on reel 6 will trigger this free spins feature and you will get 10 free spins with 3 heroes unlocked.

Again special dragon symbols can appear on all 6 reels and will give you 1 extra free spins every time.