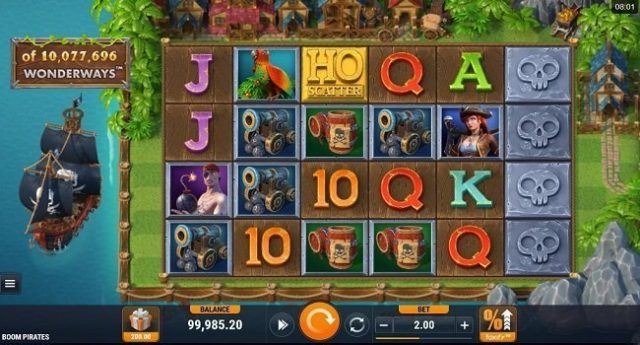 This pirate niche slot contains cartoon-style symbols and a very attractive graphics which is accessible through all devices such as mobile phones, computers as well as on tablets.

The betting range for the slot starts from just $0.10 per spin to up to $30 per spin and the maximum possible Payout here in this game could be 3,800x times of your stake or a good total of amount $190,000 for your single lucky spin.

Boom Pirates slot comes in with many good features such as The Wonderways system, free spins, the Bottom Pirates bonus or the Foxify button.

You can use the setting located on the right bottom side of the reels to adjust the betting sizes and wager for your next spin. The bet range as mentioned is $0.10 to $30.

This slot game is developed by Foxium gaming which is one of the most popular online casino gaming company that developed video slot.

Now, in this slot you can have additional reels up to 9 and in that case the Payline would rise to 10,077,696 for a single spin of yours.

The game has several other features including the free spins feature. This feature is triggered when you land 3 scatters on reel first, third and fifth column of your reels and then you will receive 10 free spins initially.

Boom Pirates feature is another very well known feature of this game which shoots cannon balls towards the reels and you will then have an expanding playing area.

As you know this is a Pirate themed online slot and hence you will see some related symbols on the reels such as a pirate, parrots, Captain Mary (female pirate), barrels filled with gunpowder , canons, and many different Royals.

Boom Pirates looks very good when it comes to have a graphics and soundtrack. Plus you could also win massively here and it could be 3,800 times of your stake.

Play Above Slot at following Casinos