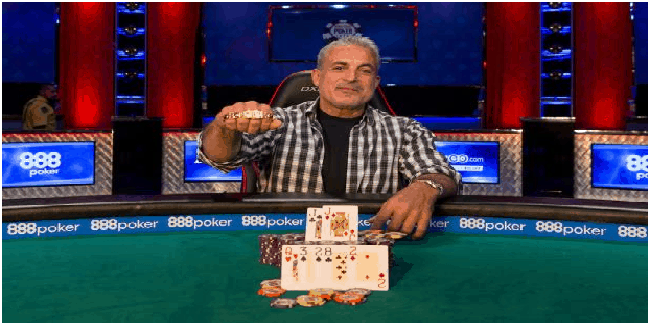 Frank Maggio, a 56 year old professional poker player from Calumet City, Illinois has won the event#31 of ongoing 2017 World Series of poker. The player pocketed a sum total of amount $617,303 from the tournament.

San Francisco’s Bill Murray finished as runner-up of the game for total $381,233. This was the event#31 of buy-in $1,000 Seniors No-Limit Hold’em Championship, which attracted 5,309 entrants. The same event attracted 4,499 players last year. This is Maggio’s seventh WSOP career cash.

Dieter Dechant, a pro poker player from Nevada finished his journey at third position and collected $281,691 from the tournament.

Maggio loves to visit Vegas to play poker games. He has played lots of WSOP tournaments/events and has pockted six cashes from those games (before this). One of his six prior cashes coming in the 2015 senior’s championship. He also frequently make his visits to WSOP Circuit events at Hammond Horseshoe.

Maggio was a very happy guy after this great win. He said after the match that “it’s a grinder”, yes…I come out here every year since I turned 50 in the seniors event. I cashed a couple of years ago, but this is bigger than anything.

The final table of this game took place on Monday due to higher number of players (5,389) at the ground. Dan Heimiller was among final tablist, who has won two gold bracalets in one for the same event back in 2014. He somehow busted in early round of the game to ninth place for total $53,817.