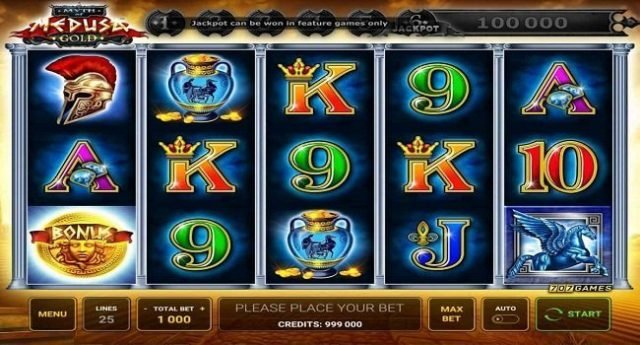 Medusa is the character which has already been very popular among online slot players. Players from across the world including the United Kingdom, Canada, European Union and rest of the world have played Medusa slot at different online casinos for real money.

Medusa featured slot is developed by different iGaming companies and powered by different software platforms and again this character is doing great at the internet.

Now the latest Medusa featured slot is released with the name of Myth of Medusa and it is powered by Greentube gaming limited.

The slot is based on Ancient Greek Mythology and hence it already has a great fan base in entire world.

Players can play this slot for real money at various Greentube casinos online and could win a maximum jackpot bonus of 4,000 times of their stakes.

Medusa is the main character and wild symbol is this game. The wild here replaces all other symbols from their places except the scatter. The wild is the most paying symbol of this game which pays you up to 3.2x times of your stake.

The Gold coins are the scatter symbol and if you land at least 2 gold coins on your reels then you will trigger free games feature to receive 7 free spins.

Mirror Bonus Game- Land a mirror symbol on the third reel of your game during free spins feature and it will trigger the Mirror Bonus feature and in that case a random symbol will be generated to fill 3 reels with it.

This Greek themed slot features many related symbols such as pottery, helmets, Pegasus, Perseus or Medusa.