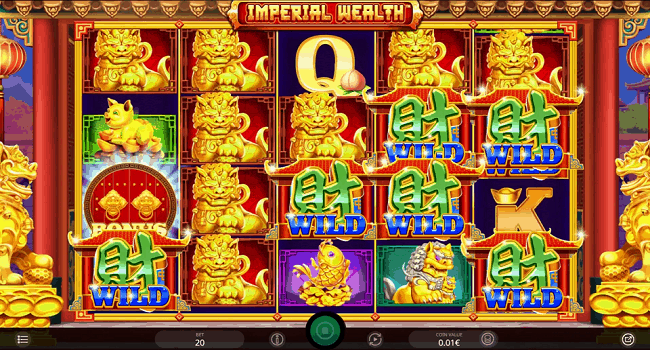 Imperial Wealth is a 5 reels and 20 Paylines video slot game powered by iSoftbet gaming limited. You can play this slot using your desktop, mobile phones or tablets with the help of coin sizes of 20p per spin to up to 20 per spin.

The game offers a jackpot of 250 times of total stake and it contains 2 Bonus rounds like the free spin bonus feature which could get you anywhere from 5 to 100 free spins with up to 5x multiplier.

Play Imperial Wealth video slot using any of the iSoftbet online casinos listed below or at LeoVegas casino.

Imperial Wealth slot will take you to the historic china where you would see some great symbols on the reels. This is a beautiful slot game which covers an enormous background soundtrack.

This slot is a feast of colour. The reels of the game are being set against a red pagoda-style building where golden lion statues are located.

The game has A to 10 royal value lower symbols as well as 4 high paying symbols such as pigs, fish, dragons and golden lion.

If you landing 5 of these high paying symbols on your wall then you will collect 12.5 times your stake.

Imperial Wealth slot contains a wild symbol as well as Bonus symbols. The Chinese letter acts as the wild symbol in this game and it would replace other symbols on your reels except the Bonus symbol.

As mentioned earlier, this slot machine has 2 bonus rounds. The first one is Imperial Roar feature and second is Fortune Tree Bonus & Free Spins feature.

Imperial Roar feature – This feature is triggered randomly during any spin. During the feature, the mighty lions will roar and they will add more values (cash prizes) on your board. The feature will also get you extra wilds as well as wild reels.

Fortune Tree Bonus & Free Spins feature – If you are able to land 3,4 or 5 of the Bonus symbol  on your reels then this feature will be activated and you would receive 5,10 or 15 free spins on that. This can lead up to 100 free spins.

Imperial Wealth slot game is a classic Asian-themed slot game being developed by the house of iSoftbet gaming limited.

You can win a maximum of 1,928 times your total stake on any free spin or regular spin.