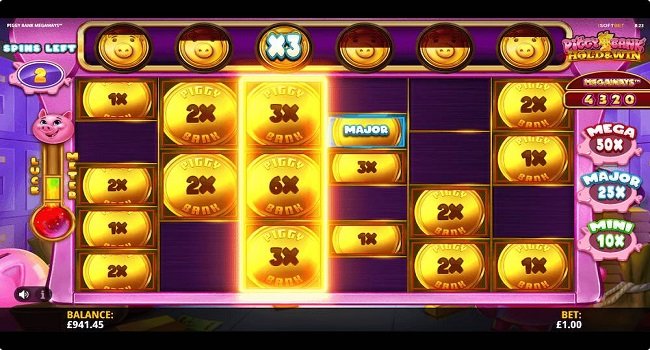 Piggy Bank Megaways is a cartoon style slot game of 6 reels and up to 117,649 Paylines powered by isoftbet gaming.

Minimum stake size you can use to play Piggy Bank Megaways Online slot is $0.20 per spin and the maximum is $20 per spin.

This is a Megaways slot game based on piggybank that comes in with cascading reels feature and respins feature.

The game also contains a Hold & Win style respins that could deliver you multiple respins.

This slot is developed by isoftbet gaming which one of the premier iGaming company that makes top performing video slots for online casinos.

Piggy Bank Megaways Slot is accessible through all of your devices including the mobiles, tablets and computers.

Land at least 3 or more identical symbols from eft to right to trigger a winning combination and to have a cascading reels feature.

The winning symbols will get destroyed and new symbols will take on during the cascading reels feature and that means you would have more chances of winnings.

The game also possesses a wild symbol that replaces other symbols to get you a new winning combination.

Symbols of this beautiful isoftbet gaming online slot are A to 9 low value royals along with piggy banks, hammers, cash and the game logo.

The gold coins are the scatters and if you landing 5 of them on your screen then it will trigger the respins feature and you would receive 3 respins.