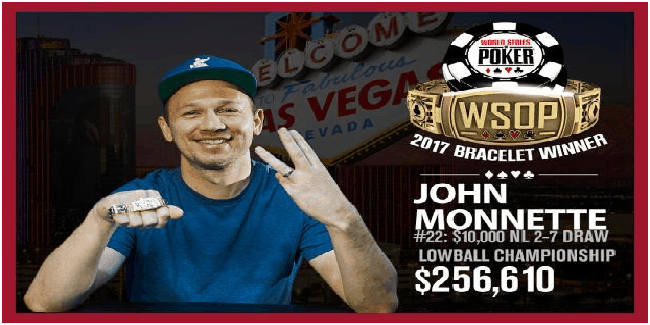 It was the $10,000 buy-in No-Limit 2-7 Lowball Draw Championship to which John Monnette did great at the end of the day and took home the title. This is third gold bracelet for the player. His lifetime earnings playing at various WSOP tournament/events are now over $2.1 million.

Per Hildebrand of Sweden becomes runner-up of this event for a total winning share of amount $158,596, meanwhile third position of the match goes to an online poker player from Philadelphia named Darren Elias, who took home $110,944 from the tournament.

The final table of this particular tournament was filled with some of the top professional poker players. Many of them were previous winners of bracelets.

One of final tablist was Paul Volpe who has two gold bracelets in his inventory. He busted out at eighth place for a total winning share of amount $24,498.

Canadian Mike Leah busted to seventh position in this game and pocketed a sum total of amount $31,903 from the tournament.

Another professional poker player named Mike Gorodinsky finished sixth. He is also a two-time bracelet winner. He pocketed $42,357 from the game being sixth place.