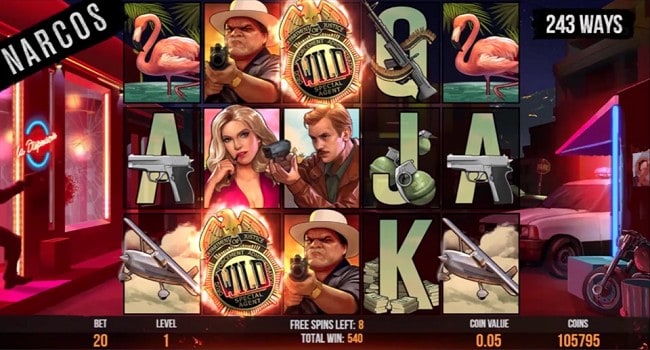 Narcos is a Net Entertainment based video slot machine that comes in with 5 reels and 243 paylines.

With total coins can be 20, this slot machine is playable across every single device including table and mobile phone with coin ranges of just 20p per spin to up to €$100 per spin.

This game is simply great for newbie slot lovers as well as for VIP and professional players because it offers a jackpot bonus of 300 times of your stake and the maximum amount can be won here are 1,506 times of your stake during free spins feature.

This game is themed on a TV series based on Columbian underworld who was involved in cocaine trading back in 1980s. This is also features Colombian underworld don Pablo Escobar.

There are 4 bonus features available in this game and they are free spins feature, Walking Wilds, a Drive-by feature and a Lock Up feature.

The game has a wild symbol in the form of the DEA badge which replaces/substitutes all other symbols on your view except the scatter and the locked-up symbols.

The Walking Wild feature- This feature is triggered when you have a wild symbol in a winning combination and in that case the wild will remain on the reels and it will sift horizontally 1 place left on each spin.

Drive-by feature- This feature is triggered randomly during base game when a car appears behind the reels where a person starts shooting. This feature will also get you big wins.

Locked Up feature- land 3 or more Locked Up symbol on the reels and this feature is triggered. In that case you will receive 1 to 10 times of your stake along with 3 free spins. You will also be able to get 1 out of these 3 features activated.

Multiplier – Your winnings will be multiplied by 2x or 3x.

Upgrade Symbols – This feature will give you 7 to 15 times of your stake.

Big Starting Value – an extra value symbol will be added.

The Free Spins feature – land 3 or more car free spins on reels 1,3 or 5 and you would receive 10 free spins.