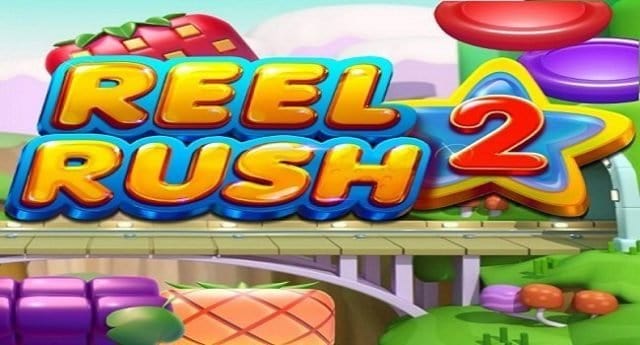 Reel Rush 2 is a video slot machine being developed by NetEnt and comes in with 5 reels and 45 to up to 3,125 Paylines.

This is a sequel of original Reel Rush slot game which was an awesome game as well. This slot is playable across all devices including your mobile phones with coin sizes of $0.20 to $100 per spin. You may play this game using best NetEnt online casinos.

The graphics and the symbols of Reel Rush 2 online slot are very entertaining. You will see 6 fruits and many colored buttons on the reels of this game.

The strawberry symbol is the most paying symbols of this game that pas you 0.5, 2.5 and 8 times of our stake for 3, 4 or 5 of these symbols on your reels.

There are a lot of bonus features (almost 11) available in this game including the free spins feature.

As like other NetEnt based games, this slot also features a wild symbol which appears on reels 2, 3, 4 and 5 and not on the reel 1 and it replaces all other symbols of your reels and creates a winning combination.

Land matching symbols on adjacent reels to form a winning combination, it may be NY SYMBOLS INCLUDING THE strawberry.

There are 8 randomly triggered features available in this Reel Rush 2 slot machine and that is simply great.

These randomly triggered features are Block Breaker feature in which 2 to 4 blocks are unlocked along with the reels to get you Re-spins feature.

The Second Chance feature is another feature which lets you play with the Re-spins if you land a winning combination.

The Random Wilds feature will add 1 to 3 random wilds on your screen.

The Symbol Multiplier feature will be another feature of this game which may randomly rewards you 5x, 10x, 15x or 20x as multiplier.

The Symbol Upgrade feature will upgrade low value symbols in to high paying symbols and will be good for you.

The fifth feature would be Extra Super Tokens feature and in this feature 3 or 15 tokens will be added to the Super Tokens Meter.

The sixth feature would be Extra Free Spins feature and in that case you would receive 1 extra free spin.

The seventh feature is the Multiplier Boost feature and this will increase your multiplier by 1x.

The eight and the most important feature of this game is the Re-Spins feature. Land a winning combination to get Re-spins.

The game offers you an initial 8 free spins if the free spins feature is activated and a maximum possible Payout could be 5,000 times your stake, which simply is huge.