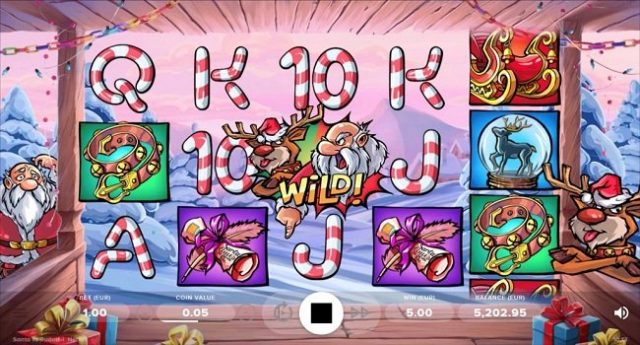 Santa v.s. Rudolf is a new online slot machine based on Christmas and festival powered by NetEnt. This slot takes place with 5 reels and 20 Paylines and is playable with all of your devices.

The game features wilds, scatters, free spins and 2 extra bonus features. Minimum betting size for this game could be $0.20 and maximum is $100 per spin. The maximum possible payout per spin is 2000 times of your stake and the RTP is 96.35%.

As you know Santa v.s. Rudolf online slot is developed by Net Entertainment which is the largest online casino game developing company in the world.

Santa v.s. Rudolf slot looks very entertaining because it takes place in the cabin of Santa where Santa is getting ready to deliver gifts to people all around the world but his hat is missing and it is because of Rudolf and that is where a hilarious/humorous fight takes place in between Santa and Rudolf.

A smooth banjo soundtrack is going through in the background of this game which makes this slot very lively.

You will see many symbols on the reels including 10 through to A playing cards and they will pay you anywhere from 3x to 5x upon arrival of 5 of a kind.

You will also see some highly rewarding symbols such as Santa Clause wishlists, Rudolf’s collar, Santa’s sleigh as well as reindeers in snow globes and they will get you 7.5x to 25x times of your stake.

Santa and Rudolph acts as the 2 wild symbols in this game and they will trigger the winning combination as well as Respin feature. Santa wild will only appear on reel 5 during the base game but Rudolph will appear on reel 1.

In that case of triggering free spins feature, you will get 10 free spins but if you are able to merge 3 Rudolf and Santa wilds then you will receive 30 free spins.

2 meters are also available above the reels and they will offer you random bonus features according to Santa or Rudolf wild move.

If this feature is triggered you will receive 3 spins and 5 reindeers placed on your reels.

In the case of filling Santa’s meter in the Free Spins feature, you will receive 1 out of 5 items as prize or a multiplier of x4. You can even win 188x of your stake.