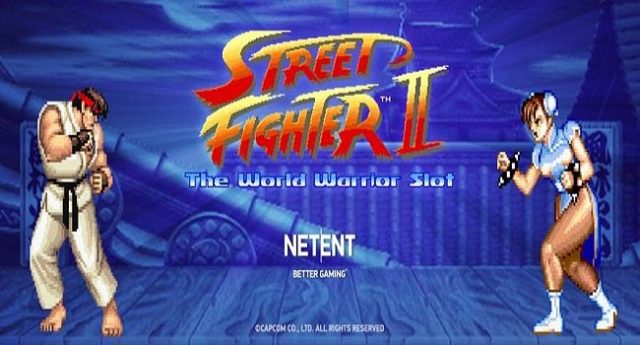 The Street Fighter II: The World Warrior slot is a brilliant-looking online video slot of 5 reels and cluster Paylines powered by net Entertainment.

The slot is simply marvelous because it has everything that a player might need while gambling online and of course it comes in with a massive 13 bonus rounds.

You will have a tremendous graphics and playground where you could choose your fighters to play the game/next round.

Other symbols you can see on the reels are A, K, Q and J royals as well as a wild which replaces other symbols and creates a combination for you.

There are 2 different i.e. victory and defeat versions available in this slot and they pay accordingly.

Coin size you could use to play this slot for real money using top NetEnt casinos online ranges from $0.20 to $700 per spin. The maximum possible payout is 160x times of your stake and the RTP is 96.06%.

This is one of the most feature of this game which lets you play with continues winnings. The contributing symbols of a winning combination are destroyed during this feature and new symbols are taking place on those vacant places to get you another winning combination.

The battles feature is another bonus feature in this game where you will have to choose 1 out of 8 characters to play the battle and if you win you will get decent cash prizes or if you lose prize would be different.

The Victory and Defeat symbols will appear on 2×2 colossal symbols.

Destroy the car to get a handsome 5 and 15 times your stake and this happens when your character’s health point during the main battle is reduced to zero.

Reduce your main opponent health to zero and you will trigger this feature which applies in 4 levels.

You can use this feature of Inset Coin Gamble to restart the Beat the Boss Free Spins feature if you lose during the free games. During this period of time the RTP rises from 98.7% and 100%.