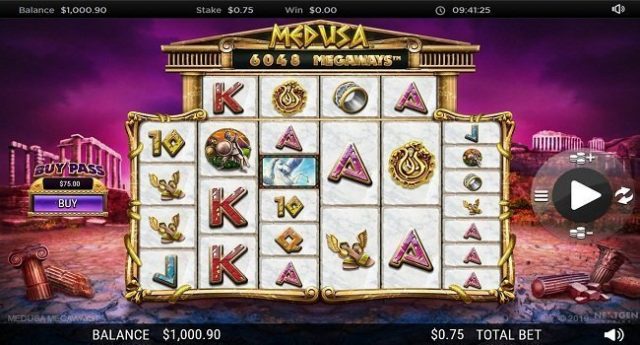 Medusa MegaWays   is a latest online slot developed by Nextgen gaming limited. This is 6 reels and up to 117,649 Paylines video slot powered by NextGen.

The game is playable across every single device including tablet and mobile phones with coin ranges of 25p per spin to up to €£62.50 per spin.

This nicely designed online slot offers you a jackpot of 750 times of stake and it contains 6 bonus rounds including free sins feature that would give you 10 free spins to unlimited free spins if activated along with unlimited multipliers.

This is a highly volatile slot game that comes in with cascading symbols, unlimited win multipliers, added wilds, upgraded symbols, free spins and scatters as well as wild symbols.

If you are professional video slot player then you would certainly know that Nextgen is a leading iGaming company that developed best video slots for desktop as well as for mobile players.

You would have heard and played some Medusa related games earlier at any nextgen online casino because it is very popular character among nextgen slots. This latest Medusa MegaWays slot from the house of nextgen gaming is a bit like the earlier.

This game is based on Greek mythology and about ancient temples. You would see symbols such as A, K, Q, J and 10 Royals as well as snake pendants, the Pegasus, sandals, rings, and battling soldiers.

The Pegasus or the winged horse is the highest paying symbol of this game that pays you 30 times of your stake if you land these 6 of these symbols across your payline.

As mentioned, the game comes in with wild as well as scatters symbols. The Medusa itself is the wild symbol and she replaces all other symbols on board except the soldier and the scatter.

The game also has an extra reel which would allow you to win big and any symbol can appear on this extra reel except the Scatter and Soldier. The game comes in with many decent features. Take a look at below features of Medusa MegaWays online slot.

Free Games feature though- Land 3 or more Medusa logo anywhere on your reels and you will trigger this Free games feature to receive 10 free spins. Every extra scatter will add 5 extra free spins to your account.

Unlimited Win Multiplier feature – You will first receive up to 2x of multiplier but after every win it will increase by 1 and could go up by unlimited.

Snake Strike feature – when you land a solder on extra reel of the game, 2 snakes will appear from left and 1 from right and they will try to attack the soldier. If the soldier is attacked by right snake then it will become scatter and left snake attack on soldier will make it wild.

Medusa MegaWays comes in with temptation feature which allow you to replace what you have already won for big wins. You should think twice before using it.

Medusa MegaWays video slot from Nextgen gaming is one of the best slot nowadays. This slot can be checked out for real money using best nextgen casino sites.