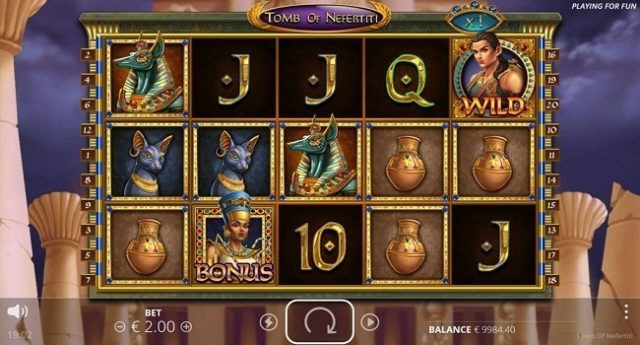 Tomb of Nefertiti is an Ancient Egyptian themed online slot machine of 5 reels and 20 to 40 paylines powered by No Limit City.

Coin range for this every device accessible slot game starts from just $0.20 to $40 per spin. The game includes a temple in the background and has many low and high paying symbols.

Symbols such as A to 10 Royals and playing cards are low value symbols however Bastet, scarab beetles, vases, Anubis and Horus ate the high value symbols.

Tomb of Nefertiti online slot is good while paying you some big amount of money. The most important thing is that ‘this game could get you a very handsome Payout of 5,000 times of your stake during free spins.

There are 4 bonus features exist in this game including the free spins feature. You land scatters on the reels and you will receive an initial 10 free spins to enjoy the game.

If you are ready to play Tomb of Nefertiti online slot for real money then you should take a look at No Limit Casino Online Sites listed here at this page.

The female adventurer symbol is the wild symbol in this game which replaces all other symbols and appears only on reel 2, 3, 4 and 5 and creates winning combinations for players.

One of the features of this game is the Wild Raider feature. This feature is triggered randomly and in that case you will get wild symbols on middle 3 reels.

The second feature of this game is known as Win Respins feature. This feature is triggered when you form a winning combination in this no limit city based slot game. The Win Respins feature will get you a respin with multiplier increasing by 1 for each respin and that could increase up to x3.

The third feature of Tomb of Nefertiti video slot is known as Curse of Nefertiti feature. This feature is triggered randomly during base game except the scatter.

The Raider Spins feature is the fourth feature of this game which gives you 10, 15 or 20 free spins for 3,4 or 5 of the bonus scatter symbols on your reels.

But this game may get you a massive 5000 times of your stake during Wild Raider feature with x3 multipliers.