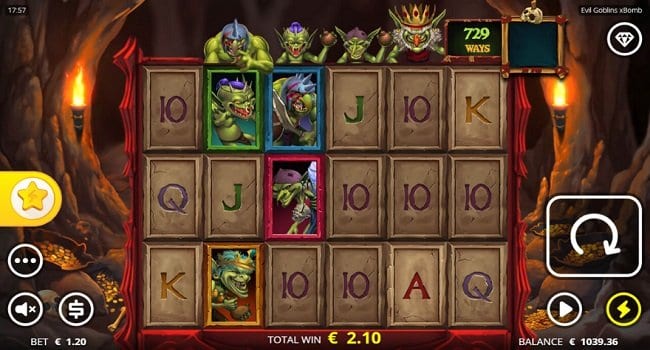 Evil Goblins xBomb is a 6 reels and 729-117,649 Paylines horror theme online slot game based on mischievous goblins which is developed by Nolimit City.

This game is set in a gold mine where you will hear a great thumping soundtrack along with witness an impressive playing environment.

Stake sizes for Evil Goblins xBomb mobile slot starts from $0.20 per spin to up to $100 per spin.

The game has 6 bonus features including the xBomb feature, free spins feature and Goblins meat bonus feature. The maximum possible payout would be 31,969x times of your stake and the RTP is 96.14%.

A winning combination is formed when you land at least 3, 4 or 5 matching symbols from left to right reel in this game. The game features A, K, Q, J and 10 low paying royals along with 5 goblins.

The game comes in with 3 Dead wild symbols which replaces and substitutes all other symbols except the scatters to create a winning combination.

This nolimit city slot is playable across all of your devices including smart phones an tablets because it is developed using HTML5 which is a platform-independent technology.

The first feature of Evil Goblins xBomb mobile slot would be the cascading reels feature.

This is a feature where all the contributing symbols of a winning combination are destroyed and new symbols will take place on those positions.

Landing at least 3 Dead Wilds will trigger the Resurrection Wilds feature and you will receive 11x multiplier on your winnings. 4 wilds will grant you 33x and 5 wilds deliver you 55x of your winnings.

Some other bonus features of this game are  Goblin Sacrifice feature, Evil 4 feature that offers increasing multipliers and let the game goes to up to 117,649 Paylines.

This feature when appears will remove adjacent symbols on your reels except the scatters and will increase your winning by 1x. The xBomb feature will also add an extra reel to your playing screen and will make it 7 reels game.

7 rows. This means 117,649 ways to win are possible (7x7x7x7x7x7). Finally, all xBomb symbols explode before the next cascade and explodes regardless if you get a win or not.

You can activate the free spins feature via 3 ways. The first one is to land 3 scatters anywhere on your reels to receive 8 to 9 free spins during Fresh Meat Spins featur.

or you can trigger the Goblins Means spins feature by landing 3 scatters and triggering Evil 4 feature and in that case you could receive up to 20 free spins. This nolimit city slot can be played via best nolimit city casinos online.

UK and European players can play this slot for real money of for free at best online casinos listed by top10casinoreviews.com