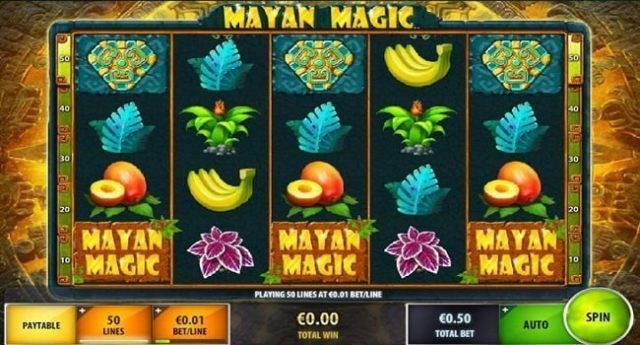 The game is playable across every single device including mobile phones (Android and iOS) and it is capable of giving you some good cash prizes. The coin size of this game starts from just 10p per spin to up to 10 per spin.

The game comes in with 3 different bonus features such as Mayan Wilds feature, Mystery Wild feature and Mystery Sync feature.

Mayan Magic Slot is a very bright video slot developed by NoLimit City. The reels of the game are being set against a backdrop of cascading waterfall, where you would see many symbols such as a snake, a leopard, 5 gemstones as well as 3 main Mayan characters.

You would also see a woman in the gold head dress in this game which is the most valuable symbol that pays you 1,4 or 20 times of your bet for 3,4 or 5 of these symbols.

Mayan Wilds feature- land a wild symbols anywhere in the middle 3 reels and this feature will be activated. You will get a respin with the sticky wild. More wild during this feature will get you more free spins/respins and the multiplier is increases by 1x.

Mystery Wild feature – This feature the symbol on the middle 3 reel will turn in to wild symbols and will form you good winning combinations. This feature can be triggered randomly during base game.

Mystery Sync feature – During this feature, the middle 3 reel symbols will be synchronized and will form a winning combination and this feature can also be triggered during base game on any random spin.

This is one of a good video slot game which could fetch you a good total of 11,456 times your total stake on every free spins or random spin. Play this slot using our database of best online casino NoLimit City.