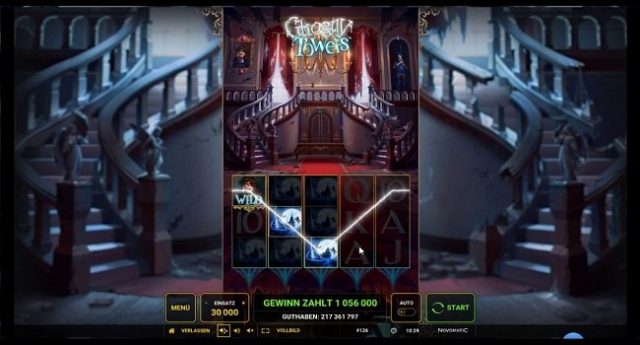 As the name suggests, Ghostly Towers is a horror themed online slot game for which reels and 5 and Paylines are 40 and is powered by Novomatic. Though, this slot feels like Scooby Doo and not like the Exorcist.

Ghostly Towers video slot is playable with all devices like smart phones, tablets and computers with initial betting/coin size of $0.40 per spin to a maximum of $100 per spin.

The game contains 4 different bonus features including the free spins feature which if activated will give you 5 free spins along with up to 5x of multiplier. A to 10 Royals can be seen on the reels which are low value symbols, meanwhile the full moon scene is a high paying symbol that doubles your stake.

The dandy Pierre is the wild and it replaces other symbols to get you 3x of your bet for 5 of his symbols across your payline.

Ghostly Towers offers you a jackpot prize of 2,400x times of your stake for best possible combination on your reels.

As mentioned, there are 4 bonus rounds available in this game and they are Wickedly Weird Wilds feature, Mental Multiplier Mania feature, Spooky Symbol Slither feature as well as the free spins feature.

Wickedly Weird Wilds feature- If this feature takes place you will get 15 wilds on your reels due to Pierre.

This feature could get you up to 20x of your stake. Here in this feature Pierre will make a grand entry with a book and flick through the pages.

During this feature, Pierre will slice the reels to remove symbols that create a new winning combination.

The RTP of this slot is 95.15% and maximum possible payout during Mental Multiplier Mania feature could be 2,400x times of your bet.