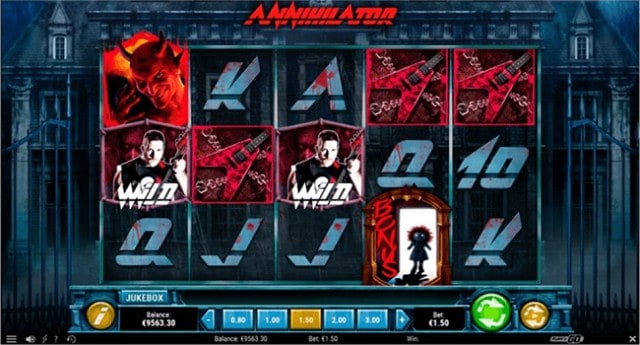 Annihilator is a 5 reels and 10 Paylines video slot machine themed on to the Canadian metal band that was founded back in 1984 and sold a massive over 3 Million tracks.

Annihilator slot is playable across all of your devices such as smart phones, computers and tablets with betting sizes of $0.10 to $100 per spin and is powered by Play’n Go Gaming.

The game takes place against a creepy mansion in the background and is inspired by the Fun Palace song which is related to ‘Never, Neverland’ album.

You will see low value A, K, Q, J and 10 Royals as well as 3 high paying symbols i.e. Jeff’s iconic Epiphone, Annihilator II guitar, Alice and her doll Clare and a broken mirror on the reels of this Annihilator Slot.

Jeff Waters is the guitarist of this band who acts as the wild symbol that replaces and substitutes all other symbols except the scatters and creates a combination for you. Land 5 wilds on your reels and you will receive 40x times of your stake.

This slot offers you a jackpot of 5,000x times of your stake during the Set the World on Fire feature.

This slot comes in with 3 bonus features such as In Command feature, Fun Palace feature and Set the World on Fire feature which could get you up to 50 free spins.

In Command feature is triggered randomly in this Annihilator video slot developed by Play N Go Gaming and if this happens, the Jeff Waters ‘wild’ will expand throughout the reels and will make a wild reel which fetches 1 free re-spin.

Landing 3 Clare the doll bonus symbols on reels 2, 3 and 4 will activate this feature in the base game and you will then have to pick dolls to reveal cash prizes of up to 50x times of your stake.

Set the World on Fire feature

The devil symbol is the scatter an hitting 3 of these will devils on reels 1, 3 and 5 simultaneously will trigger this feature and you will receive With 8 free spins. You can get up to 50 free spins during this period.