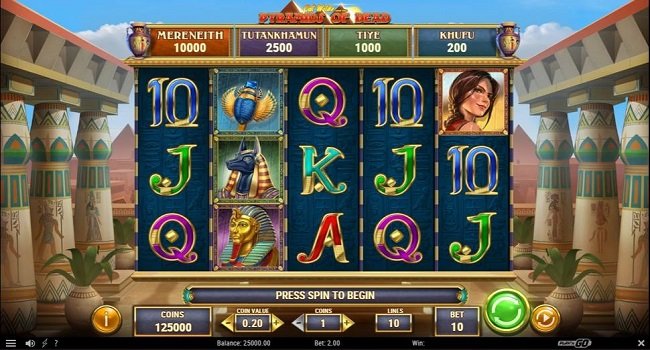 Cat Wilde and the Pyramids of Dead is an Egypt theme online slot game of 5 reels and 10 Paylines developed by Play’n Go which is a premier iGaming company.

The game is developed with HTML5, which means it will run on every single platform of yours including mobiles and tablets.

This is another game in the ‘Dead’ series which is very popular among online casino players.

The game features ‘Cat ´who is an intrepid daughter of Rich Wilde.

In this adventurous slot game, the cat is looking to find the secrets of the forbidden tomb. Stake sizes of this slot ranges from $0.10 per spin to up to $100 per spin.

The game has 4 bonus features such as Jackpot feature, free spins feature and the gamble feature. You can play Play’n GO Cat Wilde and the Pyramids of Dead Slot for real money using your mobiles at top rated mobile casinos.

Graphics, playground arena and the Indiana Jones kind of soundtrack of this slot is simply awesome.

You will see the Egyptian pyramids in the background of this game. Symbols of this slot are A, K, Q, J and 10 low value royals along with Jackal god Anubis, scarab beetles and Tutankhamen and Cat Wilde.

The pyramid symbol is the wild as well as scatter symbol of this game that replaces all other regular symbols to create a winning combination. One of the bonus features of this game is the free spins feature which is triggered when you land scatters on your reels and it offers 8 to unlimited free spins.

The game also offers a maximum possible wining amount or jackpot prize of 10,000x times of your stake.

The return of player is 96.2%. Landing 3 or more matching symbols from left to right reel will create a winning combination in this game.

Along with the jackpot prize, the game also has an instant prize feature which can get you 5 to 100x times of your stake for 5 wilds or scatters on your reels.