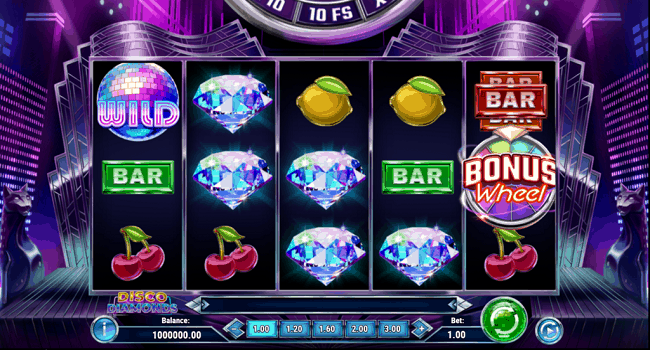 Disco Diamonds is a Retro and Disco themed slot game of 5 reels and 243 Palines powered by Play’N Go Gaming.

The game takes place in a nightclub with an outstanding graphics and soundtrack. The symbols of this slot are low value Royals along with lemons, bars, lucky 7s, cherries, treble 7s and diamonds.

The diamond symbol is the highest paying symbol which offers you 5x times of your bet for 5 of a kind.

The game comes in with a wild which replaces other from their places to create a combination and offers you 50x times of your stake for 5 in a combination.

The game has 3 bonus rounds including the free spins feature which if activated will grant you 20 free spins along with increasing multiplier.

The coin range for this slot is $0.10 to $100 per spin. Play Disco Diamonds slot online using your mobile, tablet or computer.

Disco Diamonds slot is 5 reels,3 rows and 243 paylines slot game and hence landing at least 3+ matchings symbols will create a wining combination and you will be paid some decent amount.

The golden disco ball is a special kind of wild symbol which is appears on your reel will grant you a respin with 2x multiplier. Another golden disco wild during this feature will again trigger a respin.

Land bonus wheel scatters on your reel 1,3 and 5 to trigger the Bonus wheel feature and to receive up to 50x times of your stake.

Landing the Golden disco ball wilds can also trigger the free spins feature and you may receive 5,7,10 or 20 free spins along with up to 3x multiplier.