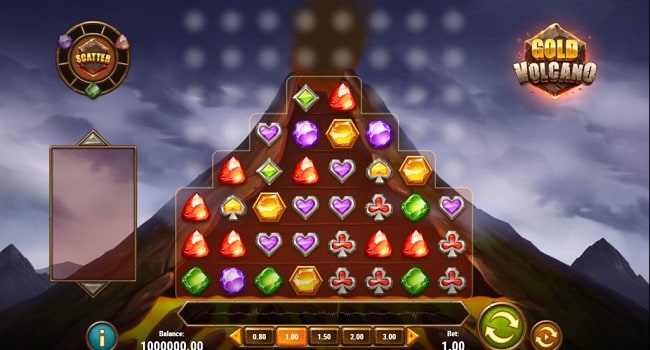 This slot is playable with all of your devices like smart phones and tablets with coin sizes of $0.10 to $100 per spin.

The Gold Volcano online slot looks awesome on every single device because of its graphics and playing arena.

The Gold Volcano slot comes in with 8 bonus features including Cascading Reels feature, Dormant feature, free spins feature and it offers you a maximum of 10,000x times of your stake as highest payout. The RTP is 96.20%.

The Gold Volcano slot is a cluster Paylines video slot and hence landing at least 4 or more matching symbols on your screen will get you some decent cash prize.

Just like other games, cascading reels feature will give you more winning combination in this game as well.

Here in this feature, the winning contributing symbols will be removed and new symbols will appear on those places to form another combo.

The dormant feature comes in to play randomly during the base game where you will have 1 out of 3 features/effects.

Rumble feature: All the symbols appeared on the reels will be shuffled and 1 new symbol will turn in to scatter.

Lava feature: The lava effect if comes in to play will give you more chances to create winning combinations.

Excavate feature: 3 to 5 wilds will be added on your screen and that will form a great winning combination.

When symbols of a winning combination removed a new wild will appear on those vacant places with 2x multiplier and this feature is known as the Pressure feature.

Fill the existing meter with scatter symbols (the volcanic piece of rock) to trigger this feature. There are 3 levels and each required 3 scatters to get filled. This will give you 5 free spins initially and could go up.