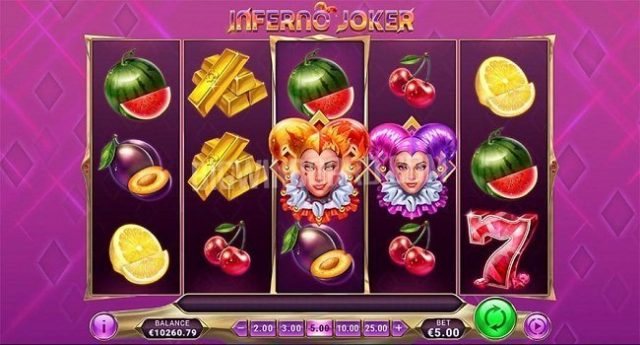 Inferno Joker is a classic slot machine that comes in with 5 reels and 5 paylines and is powered by Play’n Go Gaming limited.

The game contains re-spin feature which allows you to win 2,500 times of your stake. You can play this slot using coin sizes of $0.05 per spin to up to $100 per spin at top Play’n Go Gaming Casinos.

The Joker is the highest paying symbol of this game which offers you 5, 15 or 100 times of your stake for 3, 4 or 5 of his symbols across your payline.

The game also features an Inferno Joker scatter symbol that could appear on middle 3 reels and would trigger the Re-spin feature of this game.

In that case of activation of the re-spin feature, the reels will be held and the rest and remaining reels will re-spin to match symbols.

If a player manages to fill all the symbols on his reels with great Inferno Jokers symbols then he would collect a massive 2,500 times of his stake.

Inferno Joker slot is a classic one which looks great on mobile as well as on the desktop and tablets.