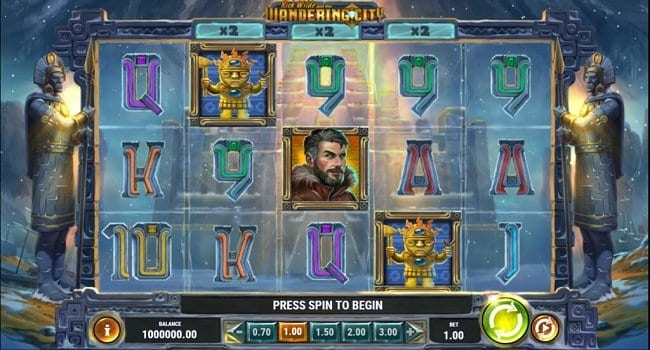 Rich Wilde and the Wandering is an adventure theme mobile slot game of 5 reels and 243 Paylines developed by Play’n Go Gaming.

The game is set in Patagonia region of the south America, where Riche Wilde (the explorer) is searching 1,000 years old Wandering City.

Rich Wilde and the Wandering City is a tremendous online slot game which is playable with Android phones, iOS phones, tablets and computers.

Symbols of this adventure theme slot are A to 10 low paying royals along with statues, daggers, skull heads and Rich Wilde himself.

Rich is the highest paying symbol here who offers up to 4x times of your stake for 5 of a kind anywhere on your screen.

The game has a wild as well as a scatter symbol. The diamond is the wild symbol which when appears replaces other symbols to get you a winning combination.

Landing 3 or more scatters will rigger the free spins feature round and players will receive 10 to 60 free spins along with up to 6x multiplier.

The return of player percentage of this play’n go online slot is 96.2% and the maximum possible win could be 10,000x times of your stake.

Landing 3 or more matching symbols from leftmost reel to right reel will create a winning combination.

Another feature of this play’n go slot is the Multiplier feature.

The multiplier feature gets activated randomly during the base game and if that happens you can easily land 2x to up to 6x multiplier during the game on any random spin.

You can also play Book of Dead online slot developed by play’n go gaming which is also driven by Riche wilde that offers great payouts on your winnings.