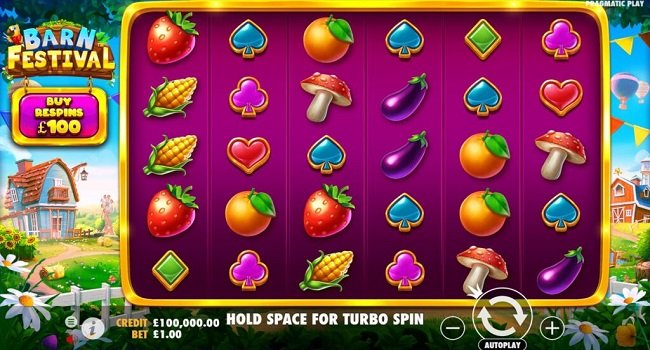 Barn Festival is a farming theme mobile slot game of 6 reels and 20 Paylines powered by Pragmatic Play. This is a high volatile slot game which is based on farming and its festivals.

You will see different kinds of vegetables and fruits on the reels of this game. This game is developed via HTML5 which means it will run perfectly on mobiles, tablets as well as on computers.

Stake sizes for this slot ranges from $0.20 per spin to up to $100 per spin. The game comes in with 11 bonus features including the free spins feature, tumbling feature and multiplier.

The maximum possible payout or jackpot prize would be 20,000x times of your bet size and the RTP is 96.45%. A winning combination is formed when you land at least 3 or more identical symbols on your screen.

Symbols of this slot includes low value clubs, diamonds, spades and hearts along with high paying corn, mushroom, orange, aubergine and the strawberry.

The later is the most rewarding symbol that offers 50x times of your stake for 12 of a kind.

The background soundtrack and graphics of this game are very much enjoyable.

You will hear sound effect of birds and farm animals in the background which makes this game much prettier and lovable. Landing the Respins feature will intensify the background music.

There is an autoplay option available in this Barn Festival Slot game which allows you to play up to 1,000 autospins.

As mentioned, there are several number of bonus features and modifiers exist in this pragmatic play game. The first one among them is the tumble feature.

This is a great feature which offers multiple winning combinations to players. During this feature all contributing symbols are destroyed and new symbol appear on those positions.

Money symbols become win multiplier when you land 3 or more money symbols during base game.

This feature is triggered when you land 4 or more money symbols during base game and if that happens you will be given 3 respins with reel 1 and 6 locked.

Another bonus feature is the Buy Money Respins feature which starts for 100x of your stake.

This feature is not available for UK players. Play Barn Festival Slot for real money at best online casino pragmatic play reviewed and listed below.