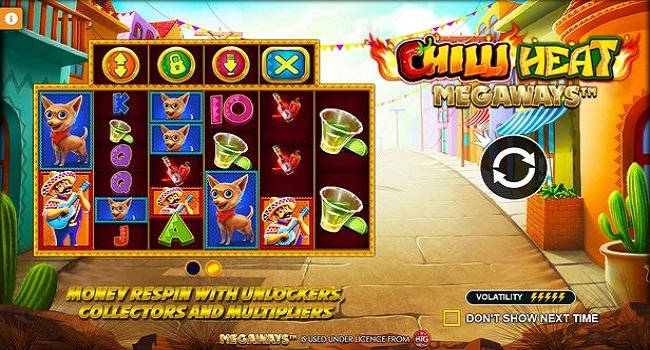 The game is playable with tablets, mobiles (any version) and computers because it is developed with HTML5.

Symbols of this beautiful and nicely designed mobile slot game are A to 9 low paying card suits along with Margarita & Lime, Chihuahua Dog, Mariachi man as well as Hotsauce & Chilli.

The game also comes in with a wild symbol that replaces all other symbols from their positions to make you a new winning combination.

This is a medium to high volatile online slot game that offers you a maximum of 5,000x times of your stake as Jackpot prize whereas the RTP of this slot ranges from 95% to up to 96.50%.

Starting coin size, you can use to play Chilli Heat Megaways mobile slot $0.20 per spin and the maximum is $100 per spin.

The game also has an AutoPlay option which can be used for playing a certain number of spins.

This is a 6 reels slot which means you can have 8 symbols on every single reel to make it a 200,704 Paylines game.

The first feature of this game would be appearance of the wilds. Landing a wild will not only replace other standard symbols but it will also create a winning combination for players.

Landing 6 or more Money symbols will trigger the Respins feature and you would receive 3 respins along with up to 10x multiplier.