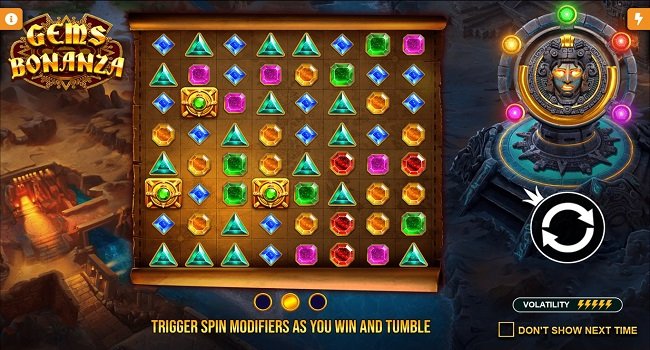 Gems Bonanza is a video slot of 8 reels and cluster Paylines powered by Pragmatic Play Gaming.

This slot is accessible through every device including mobile phones, computers and tablets with initial betting size of $0.20 per spin to a maximum of $100 per spin.

You will see a mysterious pyramid in the background of this game where the statue fires off when a modifier taking place.

The game comes in with 7 bonus features and modifiers and it offers you a massive/huge 10,000x times of your stake as Jackpot prize.

7 Bright coloured gems can be seen on the reels including the red Jewel which is the highest paying symbol here which pays you 1,000x times of your stake for 25+ matching symbols on your Grid.

This is a medium volatile online slot which can be great for real money players. If you love to play Gems related slot then Gems Bonanza could be a great start for you.

You can play this slot using any of your devices because it is a platform independent slot which runs perfectly on every gadget.

The spin feature takes place during base game where on any spin you could see a coloured marking behind the symbol and if it remains part of a winning combination then it will trigger several modifiers for you.

Nuclear feature: The blue marking will trigger this feature where all symbols will be removed and new symbols will appear.

Wild Gem feature: Pink marking will trigger this feature and you have all wilds on your reels except 1 with new Payout.

Squares feature: Brown marking will trigger this feature and a block of 2×2 symbol will be placed randomly with new payout.

Colossal feature: 3×3,4×4 or 5×5 Mega Blocks will be added when red marking triggers this feature.

Lucky Wilds feature: Land green marks to trigger this feature you will have 5 to 15 wilds with New Payout.

This feature is triggered when you have collected 114 symbols from a single spin with 2x multiplier in Level 1. The level 2 comes in to Play with 116 symbols and 4x multiplier.

Level 3 for 120 symbols and 6x multiplier while Level 4 and 5 will play when you collected 125 and 130 symbols along with 5x and 10x multiplier respectively.