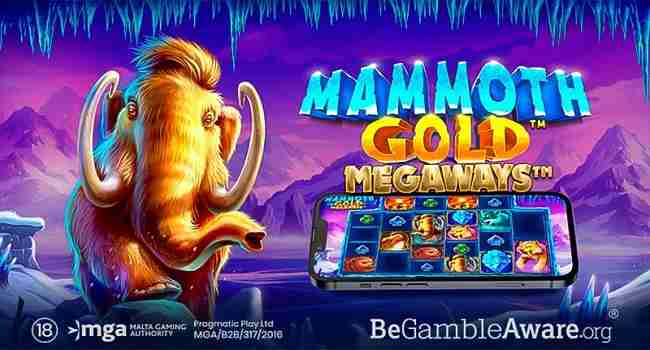 Mammoth Gold Megaways is a Prehistoric Megaways type of slot that takes place with 6 reels and up to 117,649 Paylines powered by Pragmatic Play.

The game is playable with mobiles, tablets as well as personal computers with stake sizes of $0.20 to up to $100 per spin.

The maximum possible winning amount in this game could be 10,000x times of your tale and the return of player percentage is 96.03%.

The free spins feature is triggered when you land 3 or more scatters anywhere on your reels and if that happens it delivers 5 to unlimited free spins.

Mammoth Gold Megaways is a high volatile slot machine in with a winning combination is made when you land 3 or more matching symbols from left to right reel.

The game also comes in with an AutoPlay option which let you play this game for u to 1,000 times automatically.

The game is set thousands of years ago before the Ice Age. The graphics, playing arena, environment and the background soundtrack of this Pragmatic Play slot is super awesome.

Symbols of this game contains low paying card royals along with high paying bear symbol, a dodo symbol, a wolf, a warthog and a sabertooth tiger.

The mammoth himself is the highest paying symbol of this game that offers 5 times of your betting sizes.

You will also see a volcano symbol which acts as wild symbol that replaces other standard symbol except scatters to form a winning combination.

The second bonus feature is the Multiplier Wilds Feature. This feature rewards of 2x to up to 6x of your stake.

Landing 3 or more iceberg scatter anywhere on your reels will trigger the free spins feature round and you will get 14 free spins instantly.

You may play Mammoth Gold Megaways slot for real money at best pragmatic play casinos or at top rated Indian casinos mentioned below.