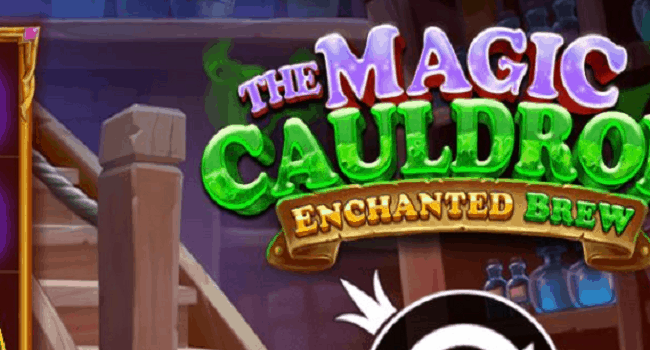 The Magic Cauldron-Enchanted Brew is 7 reels and cluster-based slot machine which comes in with 9 bonus features and is powered by Pragmatic Play.

This beautiful looking slot is playable across all devices such as Android phones, iOS phones, computers as well as with tablets.

The bottle contains the gold is the most lucrative symbol of this game which offers 1x of your stake for 5 of a kind.

Land 15 of these bottles to receive 500x times of your stake.

The initial betting sizes you could use to play this slot is $0.10 per spin and the maximum could be $100 per spin.

The game offers a maximum of 5,000x times of your stake as jackpot and the RTP I 96.44% which means this is a great game.

The Magic Cauldron: Enchanted Brew mobile slot features a number of multipliers and modifiers and hence if you want to play this slot take a look at best pragmatic casinos.

Just like other pragmatic play mobile slot, The Magic Cauldron: Enchanted Brew mobile slot also contains a wild symbol that replaces other symbols to get you a winning combination.

The game also contains the ‘Autoplay’ option which gives you 1,000 autospins without any interference.

Features of this slot are tumble feature which if triggered will provide you multiplier winning combinations.

The progressive feature is triggered when you add 25+ symbols to the cauldron which is located to the left of the reels.

And if this happens it will yield a lot of bonuses and different kinds of features to you such as Befuddlement feature and Invisibrew feature.

The Enlarging Ale feature is another feature which adds 3×3 or 4×4 colossal wilds on your reels.

Pragmatic Play Gaming is known to develop great Megaways slot games which are very popular among players because of their top Payouts.