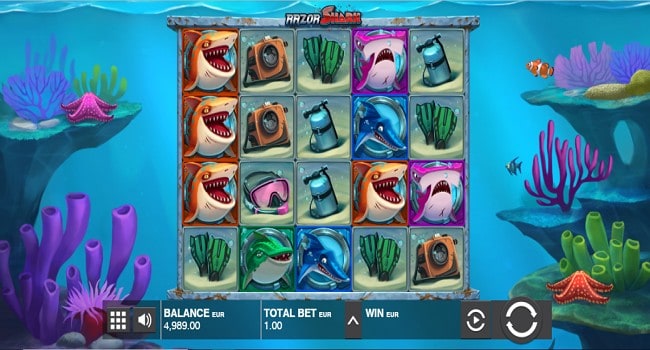 Razor Shark is an adventurous online slot of 5 reels and 20 paylines powered by Push Gaming limited. This exciting slot is accessible through every single device including tablets and mobile phones.

Coin range for this slot starts from just $0.10 per spin and it could go up to $100 per spin and with a jackpot bonus of 1,000x times of your total stake, this Razor Shark mobile slot is simply awesome.

The great white shark is the ‘wild’ symbol in this game and it replaces all other symbols except the scatter symbol. The wild pays you 2.5, 12.5 or 50 times of your stake for 3,4 or 5 of its symbols on your screen.

This cartoon styled online slot comes in with a Mystery Stacks feature. In this feature 4 mystery symbols will appear anywhere on the reels and then it will trigger the Nudge and Reveal feature.

During this feature, either the golden shark symbols or winning symbols will be revealed.

Razor Reveal feature- Each symbol positioning the mystery stack could get you a massive 2,500 times of your stake or a scatter.

Razor Shark is a highly volatile slot game where you can win 1,000 times of your bet initially but if you are lucky enough to fill all the reels with the great white shark then you could land a massive 50,000 times of your stake.