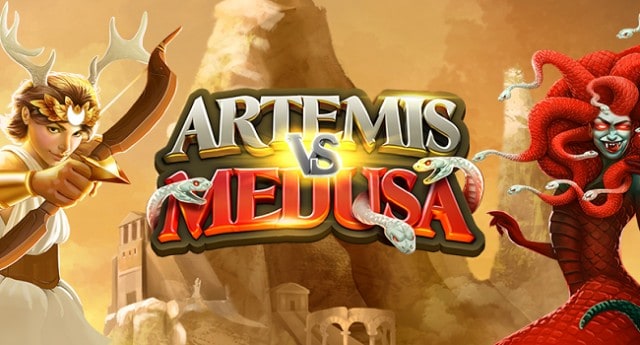 Artemis vs Medusa is an ancient Greek Mythology themed online slot game of 5 reels and 1,024 Paylines developed by Quickspin. This game is all about Greek goddess Artemis who is taking on Medusa in the surroundings Mount Olympus.

The soundtrack, the graphics and the presentation of this slot are outstanding. This game is developed using HTML5 technology that gives you the freedom to play Artemis vs Medusa slot either at mobile, tablet or computers.

The minimum and maximum coin size you can choose to play this slot ranges from $0.20 to $100 per spin and the highest possible Payout could be a massive 5,288x times of your stake.

The game comes in with 2 bonus features such as Monster Bounty feature and Unlimited Battle free spins feature. The RTP for this game is 96.17%.

The Artemis symbol is the most rewarding symbol of this game that pays up to 25x times of your take for 5 of a kind.

The golden antler symbol acts as wild symbol that replaces all other symbols from your screen area except the bonus scatter to create a combination.

Bonus Features in Artemis vs Medusa

Artemis vs Medusa slot comes in with 2 bonus rounds.

Landing any medium value symbol in the base game can activate the Monster Bounty feature for you where Artemis symbol with a golden frame may appear on last reel and would bring you Bounty payout.

The bow and arrow symbol is the bonus scatter and having them on reel 2, 3 and 4 will trigger this feature and you will receive unlimited free spins till the battle between Artemis and Medusa going through.