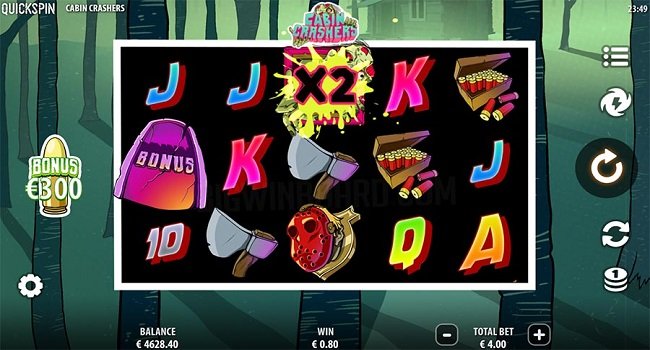 Cabin Crashers is a Zombie themed mobile slot game of 5 reels and 20 ways to win powered by Quickspin Gaming.

The Cabin Crashers online slot is playable across all of your devices.

Either you are using mobiles, tablets, computers or other devices Cabin Crashers slot is perfect for you.

The game is set against a green woodland in background where symbols such as A to 10 royals can be seen.

Other symbols are ammunition, an axe, bottles of moonshine and mounted animal heads that includes crocodiles and bears.

The wild of the game will not only replace the standard symbols to create a winning combination but it would also deliver you 5x of your stake for 5 of a kind.

The gravestone symbol is the scatter symbol that triggers the free spins feature when player lands 3 or more of these scatters anywhere on their screen.

The game has 2 bonus features and one of them is the free spins feature that offers 6 to 20 free spins along with 2 to 5x multiplier.

Return of player percentage for this medium to high volatile online slot is 96.18% and the maximum possible payout would be 22,144x times of your stake.

This is a 5 reels and 20 paylines slot game where landing at least 3 matching symbols on adjoining reels will create a winning combination.

Another feature of Quickspin Cabin Crashers Slot is the Multiplier Wilds feature.

This feature is triggered when you land a winning combination that includes a wild during the base game.

It would reward you anywhere from 2x to 5x multiplier on your winnings.

The buy feature of this game would let you play the free spins round via 75x of your stake.

UK players would not be able to play through Buy feature. So, if you are seriously looking for a zombie themed mobile slot then Cabin Crashers Mobile Slot should be your first choice.