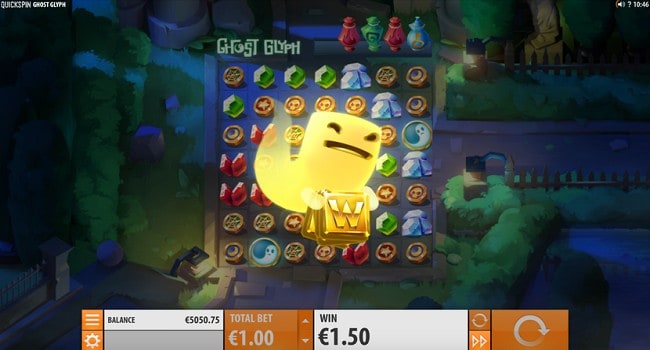 Ghost Glyph is a Ghost themed video slot game powered by Quickspin Gaming which takes place with 7×7 grid system and is playable across all of your devices like smart phones, computers and tablets.

The initial coin size you could use to play Ghost Glyph online slot is $0.20 per spin and the maximum can be $100 per spin.

The game comes with 7 bonus features including Tumbling Reels feature, the Ghost Glyph feature and free spins feature. The maximum you could win in this game is 2,260x times of your stake and the RTP is 96.18%.

The diamond gemstone is the most rewarding symbol of this game which pays you 600x times of your bet for 15+ of these symbols on your screen.

As mentioned, the Ghost Glyph slot has 7 bonus features and they are awesome. The Ghost Glyph acts as the wild symbol that replaces other symbols and pays you very well.

This feature is triggered when you form a winning combination and then the contributing symbols are destroyed to get you another set of new symbols and to form a new combination.

Like if you have green ghost Urn feature involved in your playing then it will transform 1 low value symbol in to high paying symbols and if you are plating with yellow ghost Urn feature then 4 to 10 wilds will be added on your screen.

This bonus game feature will give you 8 free spins initially and it starts when get a Blue Ghost Urn.

So, if you are looking forward to play a Quickspin slot then Ghost Glyph slot could be a new one for you because it is playable with your mobile phones as well and the maximum possible win is also huge.