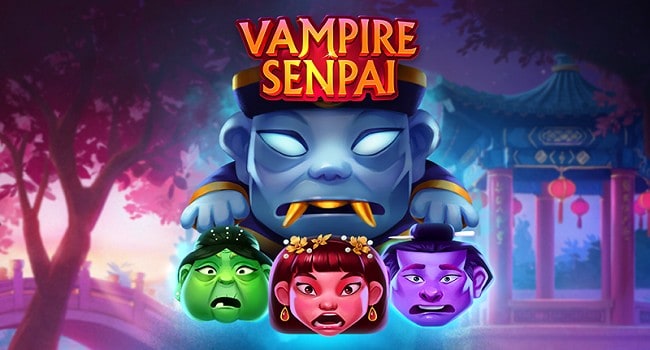 Quickspin Gaming presents you a new online slot named Vampire Senpai which is inspired by a Chinese zombie-like vampire known as Jiangshi.

The game comes in with 5×5 Grid and 40 Paylines and is placed at a traditional Chinese temple where you will see low value A, K, Q and J royals as well as 3 human character symbols as high paying symbols.

The reddish image/symbol is the most rewarding which pays 10x times of your stake for 5 in a combination.

As mentioned, the Jiangshi acts as the wild symbol and substitutes all other symbols to create a winning combination. The wild offers you up to 20x times of your bet for 5 in a combination.

Vampire Senpai slot is playable across all devices including smart phones, tablets as well as computers. You can use Android phones, iOS phones or any other gadgets to play Vampire Senpai online slot for real money.

The coin sizes for this Vampire Senpai mobile slot can range from $0.10 per spin to up to $100 per spin and the maximum you could win on a single spin can be a massive 8,849.3x times of your bet size.

The game comes in with the Turning Wild feature, Talisman Mystery Wilds feature, and Reanimated Free Spins Bonus feature. The RTP is also awesome and it stands at 96.19%

You can land anywhere from 3 and 9 Talisman wilds during your base game and they will substitute all other symbols to get you a winning combination.

Vampire Senpai is an outstandingly awesome slot game which has great features, a top class playing environment, a beautiful soundtrack and amusing graphics.

The maximum possible payout is also very cool and it is 8,894.3x times of your bet. If you love to play vampire themed slots then you should take a look at Microgaming’s Immortal Romance and NetEnt’ The Blood Suckers 2.