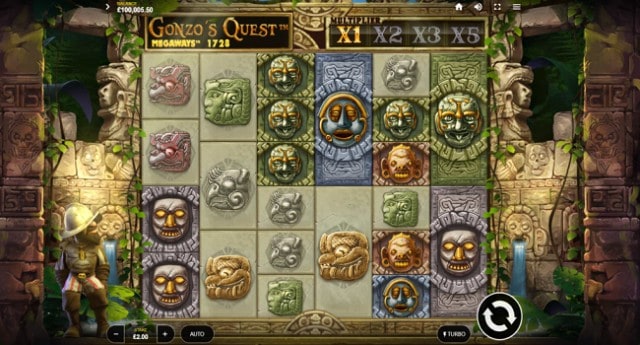 This slot is a 6 reels and up to 117,649 Paylines video slot machine powered by Red Tiger Gaming and is playable across all of your devices including smart phones and tablets with coin sizes of $0.10 per spin to up to $10 per spin.

The game has tremendous graphics and a well-planned layout which attracts players for sure. This slot is a powerhouse because if it is your lucky day, you could simply cash a massive up to 21,000x times of your stake.

This is a Megaways slot machine and hence you will have 2 and 7 symbols on each reel and landing 3+ matching on your screen will get you some cash prizes.

If you able to trigger the free spins feature then you will receive 9 to unlimited free spins along with massive up to x15 multipliers. The RTP isalso very high and it resides over 96%.

During the avalanche feature the contributing symbols are destroyed and new symbols will take place to those vacant places to get another winning combo.

The question mark is the wild symbol which substitutes and replaces all other symbols on your screen and during the Unbreakable Wilds feature, the wild will not break and rest of the symbols will break to form you another set of symbols/ possible winning combinations.

The low value symbols will destroy because of the shaking of the reels/earthquake feature.

The gold coin is the scatter and hitting at least 3 of them will trigger the free fall feature and it will give you 3 to 9 free spins.

Or you can also trigger the free fall feature if landing 2 Free Fall symbols and 1 wild on your reel.

After this feature the Royal Wheel feature will appear where you can choose to play with 4 free spins or could also go with available ‘Gamble’ feature to get up to 25 free spins.

The Gonzo’s Quest Megaways is an awesome game which has everything that you may need while gambling online.

The slot is based on a Spanish conquistador named Gonzalo Pizarro who in search of El Dorado (the lost city of gold).

You will see a Mayan temple in the background of this game where many kinds of birds, alligators, snakes and fish symbols can be seen.

The Mayan mask symbol is the highest paying symbol which offers you up to15x times of your stake for 6 in a combination.