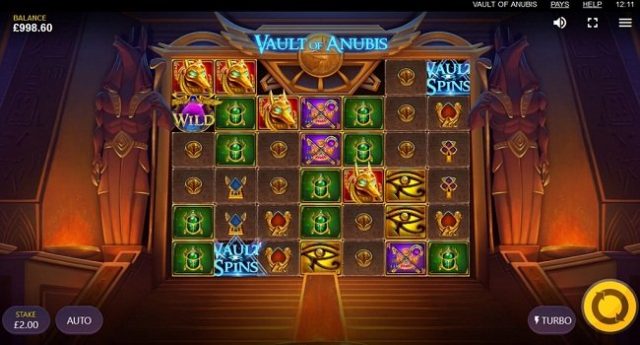 Vault of Anubis is an Ancient Egyptian themed online slot machine that takes place with a 7 reels and cluster ways and is powered by Red Tiger Gaming.

Vault of Anubis is an awesome online slot that works perfectly on mobile phones, tablets or computers because it is a platform independent video slot.

Starting and ending coin size for this Vault of Anubis video slot could be $0.10 to $150 per spin. You may check out best red tiger gaming casinos online to play this slot for real money.

You will see 5 low value gemstones as well as 3 high paying Egyptian gods on your reels. The golden jackal Anubis is the highest paying symbol that offers you 750x times of your stake for 30+ of these symbols.

The scarab beetle acts as the wild symbol that replaces all other slandered symbols on your reels and can appear anywhere.

The slot offers you a jackpot bonus of 750x times of your stake as well as it comes in with 4 bonus rounds like the Vault Spins feature, cascading reels feature, Super Symbols feature, Generous Gods feature and Gamble feature.

5 or more matching symbols will create a winning combination in this beautiful Vault of Anubis slot developed by Re Tiger Gaming.

During this feature the high paying symbols will come in to 2×2 and 3×3 blocks.

This is another great feature in which the status either side of the grid will be alive and will add wilds on your reels.

This is the main feature of this game which lets you win 10 free spins and an increasing multiplier of x1 on every single winning.

Vault Spins feature is triggered when you land a Vault Spins symbol that is collected in to the meter (top of the screen) and if you are lucky enough to fill the meter in single set of cascades.

There is a Gamble feature exist in this Vault of Anubis slot machine. The maximum possible payout in this game could be 5,469.1x of your bet and the RTP is 95.74%.