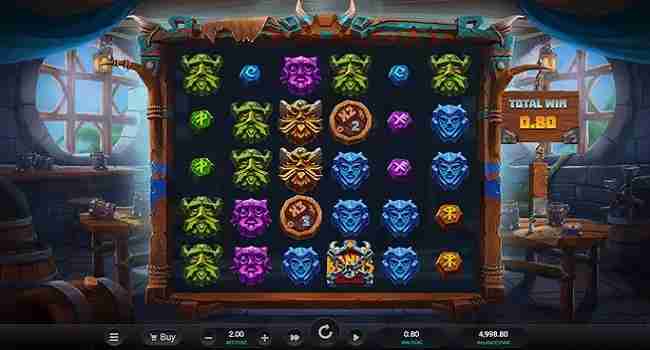 Volatile Vikings 2 Dream Drop is a new online slot of 6 reels, 5 rows and grid based paylines powered by Relax Gaming.

This is a progressive jackpot slot game which is based on Vikings and is playable across all of your devices including mobiles.

The minimum betting size one can use to play this slot is $0.10 per spin and the maximum is $100 per spin.

You may play this relax gaming slot for free or for real money using top rated relax gaming casinos mentioned below.

This is a highly creative game which can get you a massive jackpot of $€10,000,000 in a single lucky spin of yours.

The return of player percentage of this relax gaming slot varies from 94.80% to up to over 96% which is good.

Volatile Vikings 2 Dream Drop is a high volatile slot game in which a winning combination is formed when you land 3 or more identical symbols on your screen.

You will see several symbols on the reels. Some of them are different colored Vikings that offer 3x to up to 6x of your stake for 12+ of their kind on your reels.

Other symbols of this game are Thor, Odin, Loki, Faces of Freyja and a Red Boar which offers anywhere from 10x to up to 50x of your stake for 12+ of a kind.

Volatile Vikings 2 Dream Drop is a Norse mythology themed online slot game where you will see Vikings in style along with Norse Gods.

The first bonus features takes place when you land wild symbol on your reels. Wild symbol replaces other symbols to make a winning combination.

The second bonus feature would be the free spins feature which is triggered when you land scatters on your reels.

There is a multiplier feature exist in this game which offers increasing multipliers on all your winnings.

Then you have the cascading reels feature which is also a great feature that rewards multiple winning combinations to players.