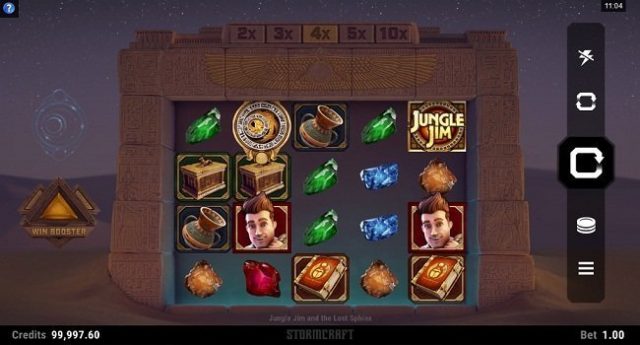 If you are a serious online slot lover then you would have certainly played one of the most popular online video slots of 2016 named Jungle Jim El Dorado powered by Microgaming.

Jungle Jim El Dorado was one of the best adventurous video slots of all time being developed by Microgaming in counter of another great slot machine named Gonzo’s Quest which was powered by NetEnt.

Now Microgaming along with Stormcraft Gaming is arrived with another great online slot machine named Jungle Jim and the Lost Sphinx.

Here in this slot, you will be taken to the Egyptian desert to locate untold treasures with the help of Rolling Reels mechanic feature and cascading feature.

Jungle Jim and The Lost Sphinx by default is a 5 reels and 4 rows and 35 paylines slot machine but it can turn in to 5×5 reels and 50 Paylines machine as well.

This is a medium volatile slot machine with an RTP of 96.30% which comes in with wilds, scatters, bonus game, AutoPlay option as well as many great features.

Minimum and maximum bet size for this slot ranges from $0.10 to $20 per spin and it offers a highest payout of 6,250x times of your stake.

As you know Jim was in search of hidden treasures in his South-American rain forest during the game of Jungle Jim: El Dorado, but now he is heading towards Egyptian deserts to explore the treasure equipped with latest technologies such as GPS and smartphone.

The game contains some low value symbols in the form of blue, green, orange and red gems, while symbols such as treasure chests and decorated amphoras are the medium paying symbols.

Jim himself is the most rewarding symbol in this game who pays you 10x times of your bet for 5 of his symbols across your payline.

The slot logo is the wild and creates winning combinations for you by replacing all other symbols from the screen.

The first and most important feature of this Microgaming based game is the Rolling Reels mechanic feature.

The multiplier and Payline would also increase after every single Cascading reels such as at entry level you will play with 5×4 reels and 35 paylines.

Landing 3, 4 or 5 of the scatters will trigger the free spins and you will get 12 free spins with 5x, 10x or 20x of multiplier along with that.

The beauty of free spins are ‘if you are playing with 5×5 reels platform then the free spins will deliver you x2 to x3, x4, x8, x12 and x20 of multipliers involved with it’.

Jungle Jim and The Lost Sphinx Slot is a great game and you must enjoy the features of this game by checking out top online casinos of UK, Canada, Europe as well as rest of the world or at Most Played Microgaming Casinos such as G Day Casino, Guts Casino, Hello Casino, LeoVegas Casino, Casumo Casino, Jackpot City Casino, PlayOjo Casino and SlotsMillion.