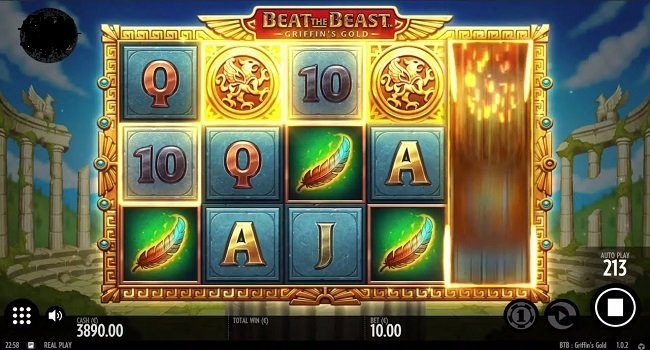 Beat the Beast – Griffin’s Gold is a terrific looking online slot game of5 reels and 9 Paylins powered by Thunderkick Gaming.

This is an ancient Greek mythology themed video slot game which is playable across mobile phones, computers as well as on tablets with coin sizes of $0.10 to $100 per spin.

The game is awesome and it comes in with the prestigious free spins feature which if activated will grant you 10 to unlimited free spins and up to 125x multiplier.

Beat the Beast – Griffin’s Gold slot contains A to 10 low value Royals along with block of stones. The game also contains feather, lyre and griffin statue and crossbow.

This is a 5 reel and 9 Paylines slot machine and hence to form a winning combination you will have to land 2 or more matching symbols on your reels starting from reel 1. The wild of this slot will replace other symbols to make a winning combination. The golden griffin wild is one of the most important symbols which offers great payouts.

The game has a Bonus Game feature which could bring you unlimited free spins along with multipliers.

The golden griffin symbol acts as wild as well as scatter symbol. The wild will replace other symbols to create a winning combination whereas more of these golden griffin scatters will trigger the Bonus Game feature and gives you 200x times of your stake along with 10 free spins.

This bonus feature can be re-triggered and that means you will win more free spins along with up to 5x5x5=125x multipliers.