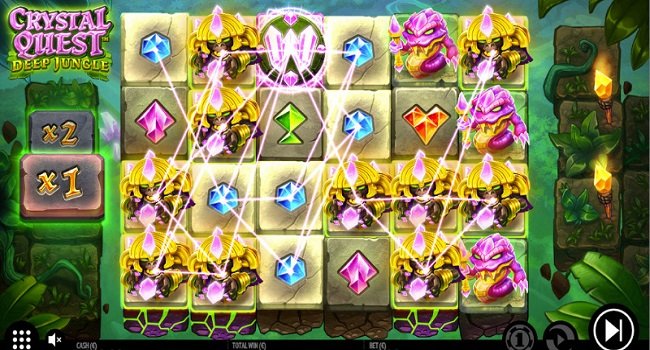 Thunderkick is a top iGaming company that develops video slots for online casinos and in addition to that they are here with a new video slot named Crystal Quest: Deep Jungle.

This Crystal Quest: Deep Jungle online slot is a 6 reel and 4,096 Paylines slot game which is themed on Jungle and is playable across all of your devices including Android phones and tablet.

The starting coin size for this game could be $0.10 per spin to up to $100 per spin. ThunderKick slots are great to play with.

They are highly entertaining. Just like those previous slots developed by ThunderKick gaming, the Crystal Quest: Deep Jungle is also very attractive. You can play this slot using best thunderkick casinos online.

The game features 4 bonus rounds including the free spins feature which if triggered will offer 12 free spins to players.

This is a Jungle themed slot machine hence you will see a green and dense Jungle in the background of this game.

Other symbols are low value Gems, a jungle pyramid and the snake henchman. The later is the most rewarding symbol of this game which offers you 5x times of your stake for 6 of a kind.

You will also find wilds, scatters and mystery symbols in this game which is value for money.

There are 4 bonus features existing in this game and they are mentioned below.

The Avalanche feature is one of the most important features of this game which lets you play continuously. The contributing symbols are removed and new symbols appear on those destroyed place to form a new winning combination along with increasing x1 multiplier.

The treasure chest is the mystery symbol which if appears will change low value symbols to high paying symbols.

The monkey is the scatter symbol and landing at least 3 of these scatters will trigger the free spins round and you will receive 12 free spins initially. 6 scatters will give you 21 free spins along with unlimited increasing multiplier.

Avalanche feature can play during free spins round which means you would have great chances to trigger a win.