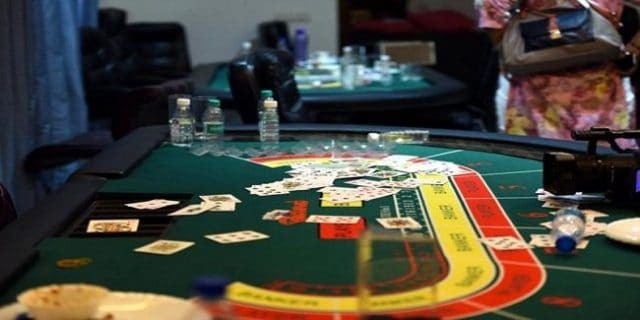 The Delhi police have said that they have arrested 19 players (mainly businessmen), five organizers and 12 staffers from south Delhi Sainik Farm.

According to the police illegal casino gambling was undergoing at the farmhouse.

The police said that the farmhouse located in the area of south Delhi used to be transformed into a full-fledged casino after 10pm, where businessmen and their partners were allowed to enter.

The illegal operation was busted because of a raid by Delhi police officer patrolling in the area. After confirming that an illegal gambling spot is currently undergoing the police arrested all men and women hanging there.

Most of them were players (19), five were organizers of the casino and other 12 were casino staffs.

Police seized at least 11 luxurious vehicles, 23 bottles of imported liquor and as many as 250 packets of cards. They also found chips worth Rs 1.37 crore (over US$200,000) at the illegal casino being ran in a posh area of south Delhi.

In a press review after this raid, police said that the entry fee to this particular casino club was Rs 5 lakh (approx $90,000) and any new entrant would needed to introduce at least two existing members of the club.

The casino was having a blackjack table, a rivoli and roulette machine for gambling needs. Chips starting from worth 1,000 to Rs 1lakh were also found at the casino place.

The police also stated that it was a close group and only people visiting this place can have the permission to enter or if anyone needed to enter he would have to introduce two permanent members of the club.

He officer said that the Information about casino was shared among property dealers, industrialists and other businessmen through word of mouth only and there were no other means to promote it.