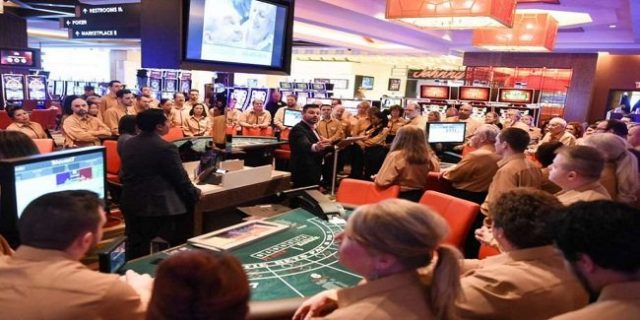 The $330 Million Rivers Casino and Resort opens on Wednesday in Schenectady. The casino attracted over 3,500 people in just two hours of its opening.

The opening of the casino was one of the most awaited things for people here. The casino features 1,150 slot machines and 66 table games in it. Total area of the casino floor would be around 50,000 square feet.

The casino also features a huge steakhouse and a restaurant lounge. Hundreds of people were outside the casino waiting for their chance to get inside this newly opened property in Ney York.

Gina Gardy, a lady who wanted to be at the casino on the opening day ceremony said that “I always wanted to be here because I like to gamble”.

Sandy, another casino lover who arrived at the Erie Boulevard casino in the early morning, got her entry only after security opened the door.

The governor of the area Andrew Cuomo said that it is going to be a huge casino for local people. He was speaking to the crowd after ribbon-cutting ceremony. Some notable guests like the Mayor, the city council president and state and county officials were also presented at the opening ceremony.

According to the official reports of the casino, it will create at least 1,000 jobs for the local people. It will also create lots of revenue for local economy and will help not only county but the state on the whole.

The Mayor Gary McCarthy said that “this new casino-project is a source of pride’,, it will create jobs, bring top revenue and will add values to our economy.

City council president Mr. Leesa Perazzo was also available at the opening spot and he said to the crowd that this casino will provide relief to tax-weary city homeowners.

Local people are very happy because of this new property which would be a better source of income for their businesses as well. The way it opened in public, hopes are high.