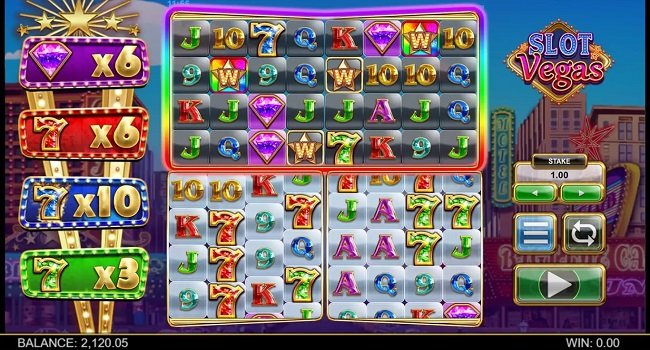 Vegas Megaways is a 6 reels and 117,649 ways to win slot game that offers a whooping Jackpot Prize of 72,310x times of your stake and is powered by Big Time Gaming.

This is a megaways slot game which is playable across all of your devices and gadgets including mobiles, tablets and computers.

The initial or starting coin size you could use to play Vegas Megaways Slot is $0.20 per spin and the maximum is $20 per spin. The game has an RTP of 96.30%.

There are several bonus features available in this game including the cascading reels feature and free spins feature.

The cascading reels feature is a feature which if triggered will give you multiple winning combinations.

All the contributing symbols of a combination are destroyed and new symbols will appear on those previous positions to give you another winning combination.

The second bonus feature of this game is the free spins feature. This feature is triggered when you land 3 or more diamond bonus scatters on your reels.

Vegas Megaways is a beautiful looking slot game where you will see A to 10 low value royals along with ‘W’ wild, diamond scatter and the lucky 7 symbols.

The wild symbol replaces and substitutes all other regular symbols to form a winning combination.

The graphics, the background soundtrack and the playing arena of this beautiful big time gaming slot is super awesome.

You will feel the difference. This game looks very elegant on laptops as well as on mobiles.

You can use your mobile phones to play this slot for real money. The game has at RTP of 96.3% and the maximum winning amount is 72,310x of your stake.

This is a platform independent slot game which is developed via HTMl5 and runs on every device.