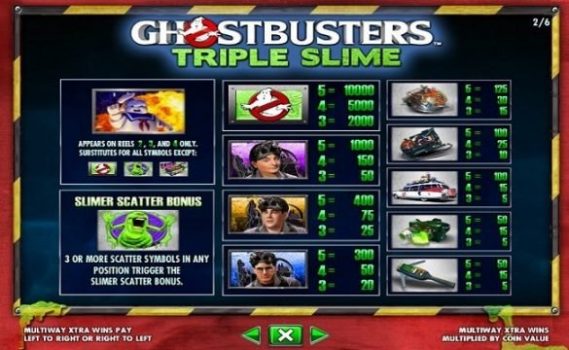 Ghostbusters Triple Slime is 5 reels and 720 paylines video slot developed by IGt software. It means there are at least 720 ways of winning cash prizes in this game. This slot can be played with coin sizes of 50p to £1,500 per spin and it offers a jackpot of 10,000 times on your total stake.

There are 2 bonus rounds in this slot.  The first bonus feature is the Slimer Scatter Bonus feature which will give you 75 times of your total stake and in this feature you can spin up to 5 wheels to win cash prizes.

The second bonus feature of this fruit machine is Slimer Scatter Bonus and in this feature you would receive 1,000 coins on purple wheel, up to 5,000 coins on the occurrence of green wheel and a multiplier of up to 10x in the Red wheel. Ghostbusters Triple Slime slot can be played either by using desktop or mobile phones including (iOS, Android).

This is a very popular online video slot game from IGT software platform which comes with MultiWay Xtra technology. The Ghostbusters logo is the highest paying symbol of this game which can reward you 10,000 times of your total stake, if you land 5 of these symbols on across a payline. Play at any IGT casino online for real money.

Another scatter bonus feature of this slot is Triple Slime Bonus feature and it gets activated when you land 3 or more of Bonus symbols anywhere on the reels. During this feature, the ghost will reveal 3 diferent wheel pointers like red, green and purple.