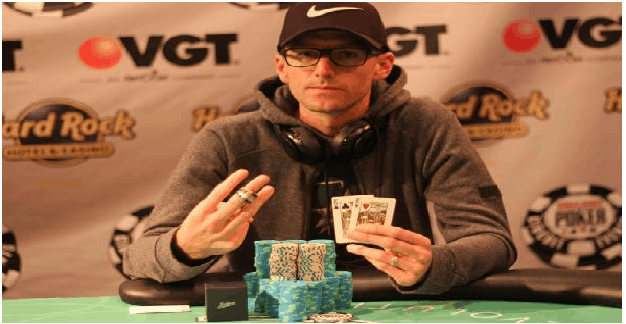 Joshua Evans becomes the casino champion at World Series of poker Circuit stop at hard Rock Tulsa. He earned the title because he participated at three final tables, won one event and that was his third WSOP gold ring.

This was the first world series of poker circuit where Evans has become the casino champion. He played three final tables of this particular tournament. The first event to which he participated was evebt#3 of buy-in $365 No Limit Hold’em, (One-day). He won that event and collected the first prize of amount over $20,000 along with a gold ring.

That victory earned him 50 points and then he participated in another two game final tables i.e. in Event#4 which was $365 buy in No limit Hold’em, where he finished for second place and received 37.5 points and that means his total points at that time became 87.5.

Just three days later after event#4, he took part in Event#8 final table, which was $850 No Limit Hold’em and that bring his total point to 115.

Evans earned a free seat in to 2017 Global casino Championship. This is an invitation only tournament which would be held at Harrah’s Cherokee in North Carolina in August.

Only players who have won WSOP Circuit main event, by winning casino champion or by finishing in top 50 will play Global casino championship. The minimum prize pool for the tournament would be $1,000,000.

Take a look at Joshua Evans’s:-