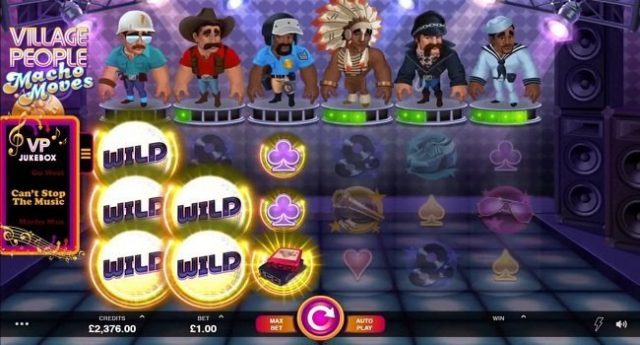 Microgaming presents you a new online slot named Village People Macho Moves. This is a 6 reels and 15 Paylines video slot that comes in with plenty of bonus features including expanding wilds and 6 free spins features and multipliers of up to 20x.

Village People Macho Moves is a retro/disco feel slot game which offers you a jackpot of 500x of your bet and is playable across all devices with betting ranges of 20p to $25 per spin.

Village People Macho Moves comes in with special wilds which expand to form wild reels will add token to their meter.

1 out of 6 free spins features can be triggered via these token meters and every one of them will get you bonus offers, cash prizes, free spins as well as multipliers.

You will see a Jukebox located in the left of the reels of the game which contains 5 different village songs such as Go West, Macho Man, Y.M.C.A, and In the Navy. It is up to you to choose/select a song to be played throughout the cycle of a spin/phase.

As mentioned, this Village People Macho Moves online slot is a disco themed slot machine and hence you will see some related symbols on the reels of the game. The dance floor contains cowboy symbol, biker, sailor, construction worker as well as native Indian.

Meanwhile the reels contains spades, clubs, hearts, and diamonds as well as dancing shoes, microphones, sunglasses, records and tracks. Every single symbol of this game pays you 3, 4, 5 or 6x of your bet for 3, 4, 5 or 6 matching symbols on your screen.

VP Wild symbol- The VP Wild feature is triggers when you land VP Wild symbol on your reel. In a case when a VP Wild lands on your reel, other positions of your reels will also turn in to wild and that would become a wild reel.

The Reel 1 would be the Construction Worker’s Macho Move feature which gives you 5 free spins along with up to 20x of your bet.

The Reel 2 is the Cowboy’s Macho Move feature which gives you 5 free spins and 2-4 wilds on every free spins.

The Reel 3 is the Cop’s Macho Move feature that gives 5 free spins with 2-4 wilds.

The Reel 4 is the Native’s Macho Move feature. This feature will also give you 5 free spins with 2 wild reels on reel 5 and 6.

The Biker’s Macho Move feature is the sixth reel feature which would yield 5 free spins and 1 low value symbol will turn in to high value symbol.

The last feature is the Sailor’s Macho Move feature. This feature also gives you 5 free spins. You can win a maximum of 2,400 times of your stake while playing this slot for real money at best Microgaming casino online.