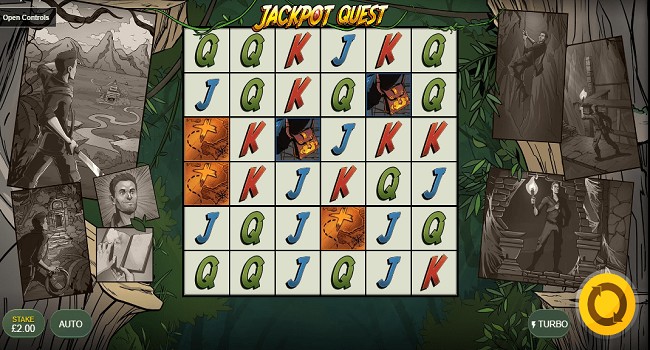 Jackpot Quest, a retro themed video slot powered by Red Tiger Gaming has a very nice design and great soundtrack. The game comes in with 6 reels and 40 Paylines which is accessible through all devices including smart phone.

The betting range for this slot starts from 20p per spin and it goes up to $100 per spin. You could win a jackpot offer of 1,000 times of your bet in this game.

There are 5 bonus features exist in this slot machine including Golden Slot feature, Whop feature, Map feature and the Satchel feature.

This game is set in a backdrop of a jungle where you will see many low value symbols and some high paying symbols. The low paying symbols of this game are A to 9 Playing cards as well as a satchel, a map and a whip.

The Golden Slot is the most paying/rewarding symbol here in this game which pays you 3,6,12 o even 25 times of your bet for 3, 4, 5 or 6 of these matching symbols on the reels.

Win Respin feature – A Respin will be awarded to you every time you land on a winning combination and this continues as long as you land on matching symbols.

Golden Slot feature – During this feature every high paying symbol will turn in to Golden Slot symbol.

Whop feature – Extra symbols will turn in to Whip symbols if this feature is activated.

Satchel feature –A random number of symbols will turn in to Satchel symbols if this feature is triggered.

Map feature – Just like above features the symbols will turn in to Map symbols if this feature is triggered.

The Jackpot Quest slot is good to go with. The Respin feature as well as other rewarding features looks pretty good at the end.