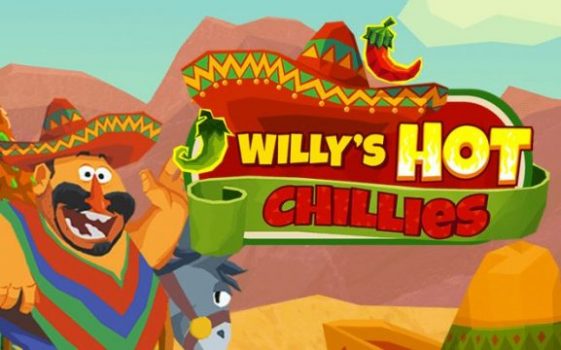 Willy’s Hot Chillies is a Mexican themed online slot machine of 5 reels and 20 Ways to win and is powered by Net Entertainment.

This colourful 3D video slot is developed by NetEnt and it looks awesome on every platform including the mobile phones either Android or iOS.

You can play Willy’s Hot Chillies slot for real money using most trusted NetEnt Casinos with betting/coin sizes of $0.20 per spin to up to $400 per spin.

As mentioned, this is a Mexican themed video slot game hence you would see related symbols on the reels including the low value diamond, club, spade and heart symbols as well as high value chilli bottles, tacos, piñatas and treasure chests.

The treasure chest symbol is the most paying symbol which pays 3x times of your bet sizes for 5 in a combination.

The maximum you could win on a single lucky spin can be 3,000x times of your stake and the RTP is 96%. The game comes in with 2 bonus features including the free spins feature.

The chilli symbol acts as the wild symbol which replaces other symbols to make a combination and they appear with x2, x3 or x5 multiplier. Land 3, 4 or 5 matching symbols from left to right to form a winning combination.

You know that the chilli symbol is the wild which substitutes other symbols to form a combination and it could get stacked to reels 2,3,4 or 5 and will yield a wild reel and could reward you 2x, 3x, 4x or 5x multiplier value.

The Willy’s Hot Wheel feature is one of the most important features of this game which can be triggered when you land a bonus symbol (Willy himself) on reel 1 and 1 or more multiplier wilds reels 2, 3, 4 or 5.

The game then goes with the Willy’s Hot Wheel that yields different rewarding options via fire pointers such as +3 spins may be added to reels or it could turn 1 of the reels into a Fire Pointer or even you could land 1 to up to 30x your total stake.

You will initially receive 6 free spins along with multiplier that increases by 1x.